Based on project statistics from the GitHub repository for the npm package @knit/yarn-utils, we found that it has been starred 186 times.

We found a way for you to contribute to the project! Looks like @knit/yarn-utils is missing a Code of Conduct.

Further analysis of the maintenance status of @knit/yarn-utils based on released npm versions cadence, the repository activity, and other data points determined that its maintenance is Inactive.

An important project maintenance signal to consider for @knit/yarn-utils is that it hasn't seen any new versions released to npm in the past 12 months, and could be considered as a discontinued project, or that which receives low attention from its maintainers.

@knit/yarn-utils has more than a single and default latest tag published for the npm package. This means, there may be other tags available for this package, such as next to indicate future releases, or stable to indicate stable releases.

KnitJS is a set of tools to help simplify development and publishing of JS multi-package repositories.

Fast: Uses Yarn to install dependencies and only needs to install once rather than in each module.

Simple: Uses built-in node package resolution so there doesn't have to be a bootstrap step.

Compatible Uses a single package.json for dependencies so knit repos are compatible with external tools.

You should have the following programs installed before starting:

It is recommended that knit be installed as a local package using npm scripts but it can also work as a global package. 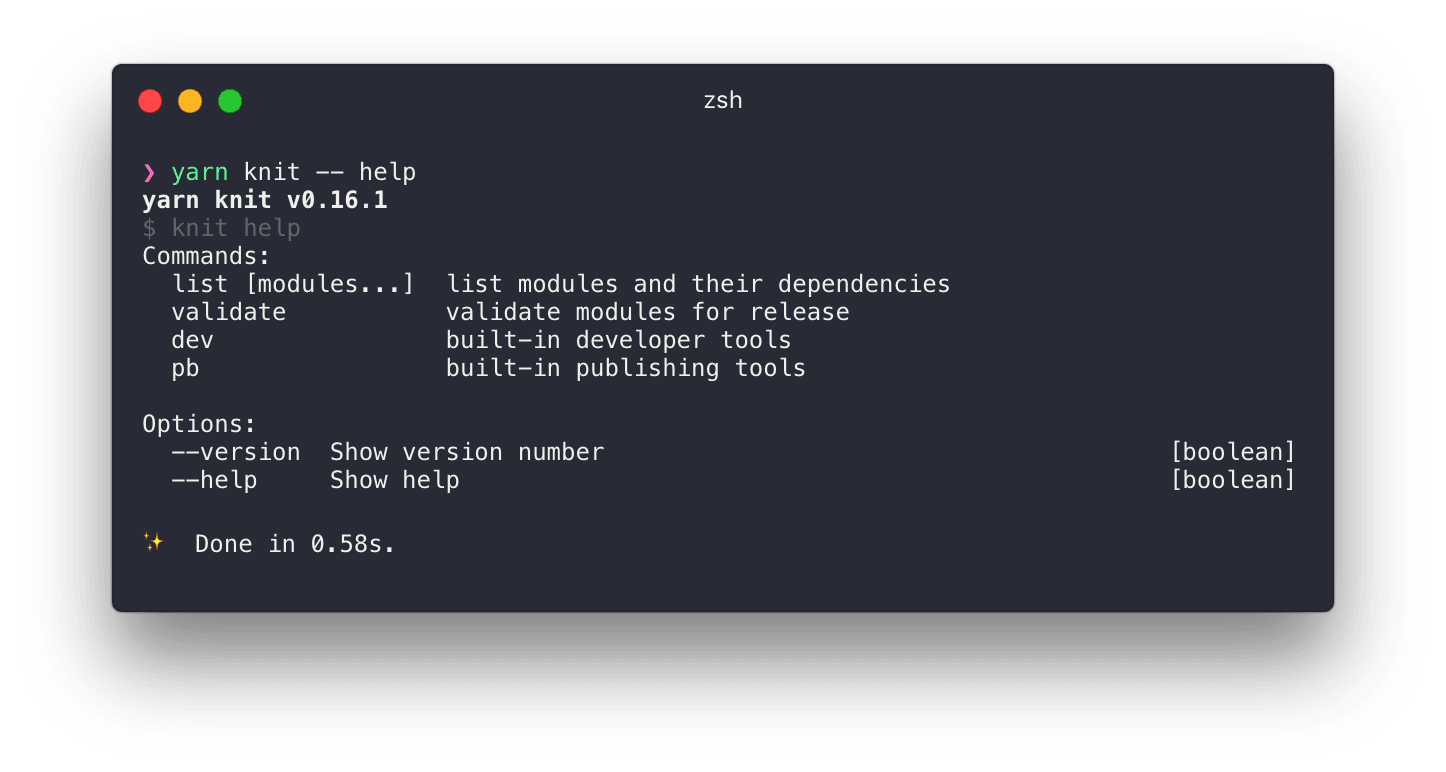 See our create-knit-app for instructions on getting started.

For a full list of commands see the cli documentation here

When would I want to use knit?

Knit excels at managing a large JS multi-package repositories so the more modules you have in your repo the more time Knit will save you trying to manage dependencies and publishing new versions.

What kind of projects are supported?

Knit supports node libraries, browser facing libraries and browser applications. By default knit can build modules targeting commonjs, es6 modules using babel and umd using webpack as well as publish to npm. For applications knit uses webpack to bundle all your assets together for easy deployment. These built-in build steps are optional and replaceable but cover the common use case of just using babel and webpack with a custom config.

How does the package resolution work?

We use depchek to generate a list of required packages per module. We can compare these to the dependencies found in your root package.json and show missing or unused packages for your modules.

How can I add an extra step before releasing?

All individual steps in a multi step convenience command are exposed as their own action. The release command can be recreated by calling each step individually and adding your custom step where needed:

How can I replace a release step with my own?

Taking the previous example to the next level you can make your own task that uses the same data and workflow that built-in knit commands use. The built-in commands are all based on @knit/common-tasks which itself uses @knit/knit-core. You could easily write your own build steps using Listr and @knit/common-tasks:

and then you can use your custom build step that will only build updated modules:

If you don't want to use Listr for some reason - you can access the @knit/knit-core api directly:

What if I want don't want to use knit at all for releasing?

You can still use knit even if you have your own build or publishing workflow. The build step that stitches together your modules' dependencies and populates your modules' package.json is a separate command that can run independently or be integrated into your workflow.

How do I make knit see a CLI tool like babel-cli?

Knit can only find a dependency if you use require(), require.resolve() or import. If you need to include a package that knit cannot see you can add it as a dependency in the module package.json.

The knit-cli does this by setting babel-cli as a dependency in its package.json

Notice that no version is set, just a *, this is because the version will be replaced later when the module is released using the version in the project's package.json

How does knit treat dependencies and devDependencies

DevDependencies are left up to the Developer to manage.

But is it treating ReactDOM as a devDependency! I need that for my app!

You can build your app in whatever way you want - but if you aren't pushing a module with ReactDOM to npm it should go under devDependencies.

Lerna is the obvious comparison here and while the over lap between the two tools is considerable they currently take a very different approach to dealing with modules.

Some advantages over Lerna:

Of course Knit wasn't created in a vacuum and is inspired by and makes use of many amazing tools:

We found indications that @knit/yarn-utils is an Inactive project. See the full package health analysis to learn more about the package maintenance status.

Is @knit/yarn-utils safe to use?

The npm package @knit/yarn-utils was scanned for known vulnerabilities and missing license, and no issues were found. Thus the package was deemed as safe to use. See the full health analysis review.