Based on project statistics from the GitHub repository for the npm package @geekie/navigator, we found that it has been starred 7 times, and that 0 other projects in the ecosystem are dependent on it.

We found a way for you to contribute to the project! Looks like @geekie/navigator is missing a Code of Conduct.

Further analysis of the maintenance status of @geekie/navigator based on released npm versions cadence, the repository activity, and other data points determined that its maintenance is Inactive.

An important project maintenance signal to consider for @geekie/navigator is that it hasn't seen any new versions released to npm in the past 12 months, and could be considered as a discontinued project, or that which receives low attention from its maintainers.

@geekie/navigator has more than a single and default latest tag published for the npm package. This means, there may be other tags available for this package, such as next to indicate future releases, or stable to indicate stable releases.

The navigation with this library is built on the concept of "stacks", which are a stack of screens of the app. You can present a new stack and push screens onto it when dismissing it, the navigation state returns to the last screen pushed to the previous stack. Below there's an image as an example: 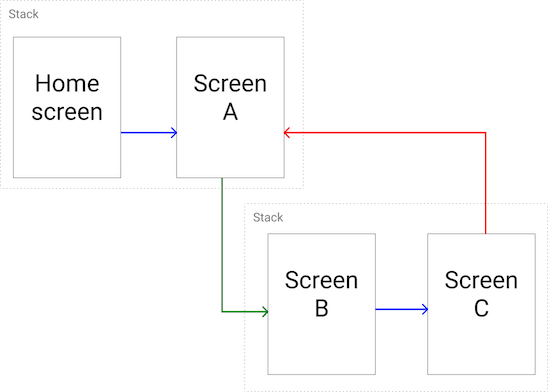 The blue arrows are pushing new screens to a stack, the green arrow is presenting a new stack with a screen on it, and the red arrow is dismissing a whole stack and coming to back to the state right before presenting the new stack.

With that clear we can check what the API looks like.

The library has a single default export which is the Navigator component that manages the current rendered screen. It accepts the following props:

The example below shows how you use those props and an example of how to implement deep linking using the resetState function.

The components rendered will receive a navigator prop that contains the commands to navigate through screens.

This is useful if you're rendering screens wrapped with withNavigator or that use useNavigator but doesn't want to render the whole navigator, or would like to pass a mocked navigator prop to check calls.

withNavigator is a higher order component that injects the navigator prop to the wrapped Component. This is useful if you need it in a deeply nested component or you can't pass the prop from the screen component.

This is a React Hook that returns the navigator provided with NavigatorProvider. This is a substitute to withNavigator().

Presents a new stack: if the argument is an array, will use that as the stack; if not an array, it will be equivalent as calling navigator.present([route]).

The screen will be slide from the bottom.

Removes the whole current stack and renders the last route of the previous stack.

The screen will slide to the bottom.

The screen will slide from the right.

Returns to the previous route of the current stack. If there's a single route in the stack, the stack is dismissed (i.e. the same as calling navigator.dismiss()).

The screen will slide to the right.

Replaces the current route but animates as push(). This is useful if you want to navigate to a new screen, but doesn't want the next screen to navigate "back" to it.

Resets the current stack to [route].

The animation is the same as pop().

The same as navigator.reset() but the animation will be the same as push().

The animations were based on the (now deprecated) React Native's Navigator.

We found indications that @geekie/navigator is an Inactive project. See the full package health analysis to learn more about the package maintenance status.

Is @geekie/navigator safe to use?

While scanning the latest version of @geekie/navigator, we found that a security review is needed. A total of 2 vulnerabilities or license issues were detected. See the full security scan results.