Based on project statistics from the GitHub repository for the npm package virtual-device-wall, we found that it has been starred 19 times, and that 0 other projects in the ecosystem are dependent on it.

We found a way for you to contribute to the project! Looks like virtual-device-wall is missing a security policy.

Further analysis of the maintenance status of virtual-device-wall based on released npm versions cadence, the repository activity, and other data points determined that its maintenance is Inactive.

An important project maintenance signal to consider for virtual-device-wall is that it hasn't seen any new versions released to npm in the past 12 months, and could be considered as a discontinued project, or that which receives low attention from its maintainers.

We found a way for you to contribute to the project! Looks like virtual-device-wall is missing a Code of Conduct.

virtual-device-wall has more than a single and default latest tag published for the npm package. This means, there may be other tags available for this package, such as next to indicate future releases, or stable to indicate stable releases.

A simple command line tool to create a virtual device wall to test your Cordova app across multiple devices. The Virtual Wall also lets your synchronize clicks, scrolls and other gestures across the devices on the wall. 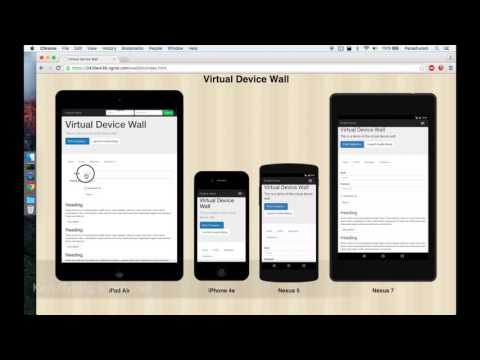 The Virtual Device Wall is a web page with devices embedded using Appetize. Once your app is built and an apk and ipa is available, it uploads these to the Appetize servers. It then starts up a local server uses ngrok to expose that server to the internet. The apps serve their content using this server. Browser-sync is responsible for mirroring clicks, scrolls and other gestures across the various devices. You can also install the app on a local device and use that as a remote control for driving the devices on the virtual wall.

The virtual wall is powerd by Ngrok, Appetize and Browser-sync.

We found indications that virtual-device-wall is an Inactive project. See the full package health analysis to learn more about the package maintenance status.

Is virtual-device-wall safe to use?

While scanning the latest version of virtual-device-wall, we found that a security review is needed. A total of 34 vulnerabilities or license issues were detected. See the full security scan results.