39 / 100
All security vulnerabilities belong to production dependencies of direct and indirect packages.

The npm package wac-ldp receives a total of 44 downloads a week. As such, we scored wac-ldp popularity level to be Limited.

Based on project statistics from the GitHub repository for the npm package wac-ldp, we found that it has been starred 1 times, and that 0 other projects in the ecosystem are dependent on it.

We found a way for you to contribute to the project! Looks like wac-ldp is missing a Code of Conduct.

Further analysis of the maintenance status of wac-ldp based on released npm versions cadence, the repository activity, and other data points determined that its maintenance is Inactive.

An important project maintenance signal to consider for wac-ldp is that it hasn't seen any new versions released to npm in the past 12 months, and could be considered as a discontinued project, or that which receives low attention from its maintainers.

wac-ldp has more than a single and default latest tag published for the npm package. This means, there may be other tags available for this package, such as next to indicate future releases, or stable to indicate stable releases. 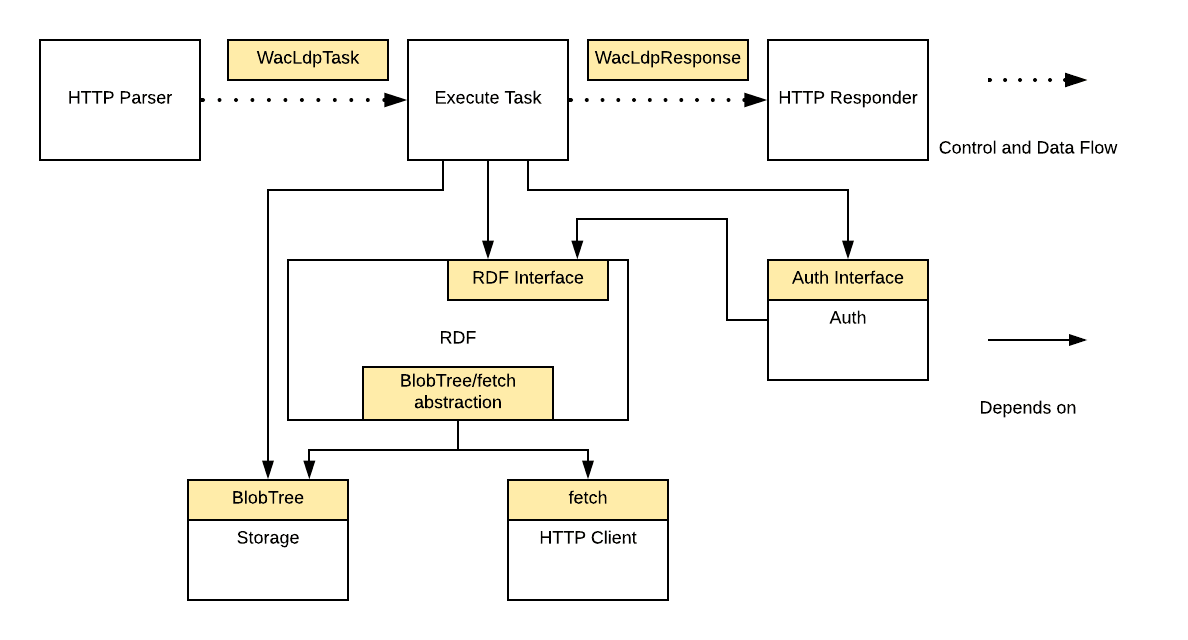 The entry point is src/server.ts, which instantiates a http server, a BlobTree storage, and the core app. This is not drawn in the diagram above.

The BlobTree storage exposes a carefully tuned interface to the persistence layer, which is similar to the well-known "key-value store" concept, where opaque Blobs can be stored and retrieved, using arbitrary strings as keys. But the BlobTree interface differs from a key-value store interface in that it not only allows writing and reading blobs of data, but also querying 'Containers', which is similar to doing ls on a folder on a unix file system: it gives you a list of the directly contained blobs and containers. This means that if we store all LDP resources inside BlobTree blobs, using the resource path from the http level as the blob's path at the BlobTree level, then implementing LDP GET requests on containers becomes very easy out of the box.

The interface looks as follows (BlobTree in the diagram):

The core application code is in src/lib/core/executeTask.ts and given a WacLdpTask (see below), it deals with:

The auth code is in src/lib/auth/ and deals with:

The Auth Interface looks as follows:

In src/lib/api/http/ are two important classes, one for parsing an incoming http request, and one for constructing an outgoing http response. Although each step they do, like setting a numeric http response status code, or extracting a bearer token string from an authorization header, is computationally simple, a lot of the correctness of this module (looking at https://github.com/w3c/ldp-testsuite and the WAC test suite that is under development) depends on the details in these two files.

The following operations are available:

Currently supported representations for RDF are Turtle and JSON-LD. The only currently allowed patch type for RDF are SPARQL-update (any) and SPARQL-update (appendOnly). The currently allowed filter types for RDF are SPARQL-SELECT, ldp-paging, and prefer-minimal-container. In the future, we might add similar modules for e.g. HTML/RDFa or partial updates to binary blobs, and when that happens we will turn this component into an abstract 'content operations' component, of which RDF, HTML/RDFa and Binary are instantiations.

Published as a hobby project, under MIT license, by Michiel de Jong. Based on version 0.6 of https://github.com/inrupt/wac-ldp.

The npm package wac-ldp receives a total of 44 weekly downloads. As such, wac-ldp popularity was classified as limited. Visit the popularity section on Snyk Advisor to see the full health analysis.

We found indications that wac-ldp is an Inactive project. See the full package health analysis to learn more about the package maintenance status.

Is wac-ldp safe to use?

While scanning the latest version of wac-ldp, we found that a security review is needed. A total of 10 vulnerabilities or license issues were detected. See the full security scan results.