Based on project statistics from the GitHub repository for the npm package unexpected-react-shallow, we found that it has been starred 117 times, and that 1 other projects in the ecosystem are dependent on it.

We found a way for you to contribute to the project! Looks like unexpected-react-shallow is missing a Code of Conduct.

Further analysis of the maintenance status of unexpected-react-shallow based on released npm versions cadence, the repository activity, and other data points determined that its maintenance is Inactive.

An important project maintenance signal to consider for unexpected-react-shallow is that it hasn't seen any new versions released to npm in the past 12 months, and could be considered as a discontinued project, or that which receives low attention from its maintainers.

unexpected-react-shallow has more than a single and default latest tag published for the npm package. This means, there may be other tags available for this package, such as next to indicate future releases, or stable to indicate stable releases.

A port of the excellent unexpected-dom to support React shallow renderer.

Diffing of props and content, including detailed diffing of object props.

And you receive a beautiful error message 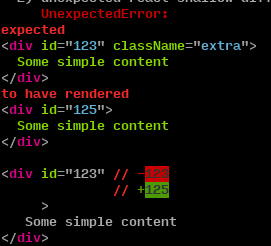 Object props are also diffed, when they don't match

Although this project itself is well tested, it is still in early development, and there may well be issues.

Use with caution. If you find any case that does not work as expected, please report it via the issues.

reactElement in this case is a ReactElement, normally created by using JSX

The same thing works for shallowRenderer.getRenderOutput().

Extra props that are rendered are ignored (see to have exactly rendered below), as are extra children.

You can make the following assertions:

to have [exactly] rendered [with all children]

If you want to check for an exact render, use 'to have exactly rendered'.

Alternatively, if you don't care about extra props, but want to check that there are no extra child nodes, use 'to have rendered with all children' Note that exactly implies with all children, so you using both options is not necessary.

It's possible to check for a part of the subtree, without testing the entire returned tree. This allows you to test specific elements, without writing brittle tests that break when the structure changes.

You can override this behaviour by using 'to contain exactly', and 'to contain with all children'

The same thing applies to children for 'to contain' as for 'to have rendered'.

String content is split up by React when you have embedded variables.

This actually produces 3 "child" elements of the div, Click on , the clickCount and the times To make this simpler, unexpected-react-shallow concatenates these values so you can simply test the previous example as follows:

If you use the exactly variants of the assertions, you will need to split up your assertion in the same way

We welcome pull requests, bug reports, and extra test cases. If you find something that doesn't work as you believe it should, raise an issue!

Special thanks to all of the unexpected team. The quality failure messages and diffs have made a huge difference to the way I test, and how quickly issues are resolved.

A huge thanks to @Munter, who wrote unexpected-dom, which enables testing DOM elements easily - it's perfect for more involved tests if you're using React and something like jsdom. A lot (most!) of the code for unexpected-react-shallow was taken from unexpected-dom.

We found indications that unexpected-react-shallow is an Inactive project. See the full package health analysis to learn more about the package maintenance status.

Is unexpected-react-shallow safe to use?

While scanning the latest version of unexpected-react-shallow, we found that a security review is needed. A total of 4 vulnerabilities or license issues were detected. See the full security scan results.