The npm package slot-bot receives a total of 2 downloads a week. As such, we scored slot-bot popularity level to be Limited.

Based on project statistics from the GitHub repository for the npm package slot-bot, we found that it has been starred 1 times, and that 1 other projects in the ecosystem are dependent on it.

We found a way for you to contribute to the project! Looks like slot-bot is missing a security policy.

Further analysis of the maintenance status of slot-bot based on released npm versions cadence, the repository activity, and other data points determined that its maintenance is Inactive.

We found a way for you to contribute to the project! Looks like slot-bot is missing a Code of Conduct.

slot-bot has more than a single and default latest tag published for the npm package. This means, there may be other tags available for this package, such as next to indicate future releases, or stable to indicate stable releases.

slot-bot provides a way to declaratively "ferry" a replica of the light children into the Shadow DOM realm. Once inside the shadowDOM, among other things, encapsulated styling can be applied to these replicated children, without having unintended side effects on DOM elements outside the Shadow DOM realm. Class names can now be nice and short, as the web component namespaces the classes automatically (as long as the rest of the application is well encapsulated, using ShadowDOM). This could improve loading performance, especially once CSS Modules / HTML Modules become a thing. Not to mention being a lot less taxing on those of us feeble minded individuals who have trouble distinguishing subtle differences between long names:

or fights over how many angels can dance on the head of a pin.

We can adjust the cloned node by subscribing to the non bubbling event 'cloned-node':

slot-bot is the equivalent of the Centre Pompidou for web components. 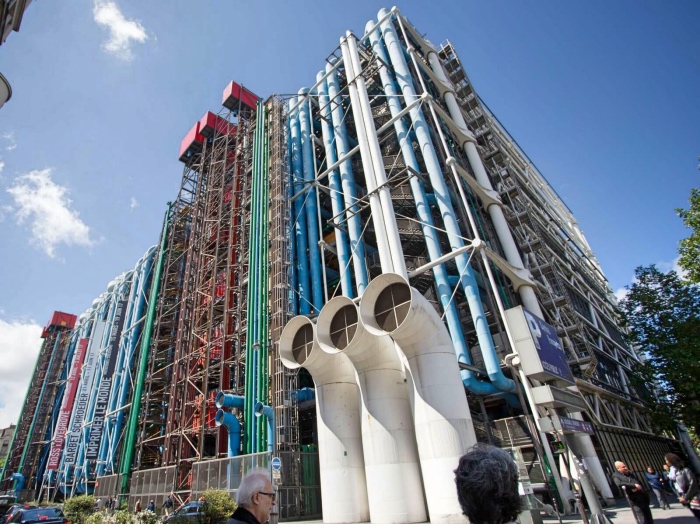 Is this abusing web standards?

Slots were built with the specific intent of ferrying snippets of content inside the Shadow DOM. Aren't you trampling all over the spirit of how web components are supposed to work?

Slots are great when they do the job. However, the ability to style the slotted content is quite limited -- only top level child nodes can be styled.

Granted, cloning a DOM tree has a cost.

In many cases, use of this component may provide a straightforward "first draft" or prototype of a component. For example, if you look at the sample markup for a timeline, one can see that some of the class names suggest ways to break down the monolith component into sub-components -- a component for an event, for example, would probably be sufficient for true slotting to be sufficient. Doing so may tend to take a bit more time than at first anticipated, because as the Shadow DOM is broken down logically, the css rules will need to be adjusted accordingly.

For this to work, three tags are needed within the ShadowDOM:

slot-bot acts as the "transfer medium" between the slot tag above it, and the placeholder DOM tag/node beneath it.

Mutations to the light children

If nodes are added or removed at the top level of the light children, the shadow content will synchronize.

However, if mutations are made inside the light children, these will not be picked up.

The container component can, though, add a mutation observer to its light children, and call SlotBot's cloneSlot() method.

The npm package slot-bot receives a total of ? weekly downloads. As such, slot-bot popularity was classified as limited. Visit the popularity section on Snyk Advisor to see the full health analysis.

Is slot-bot safe to use?

The npm package slot-bot was scanned for known vulnerabilities and missing license, and no issues were found. Thus the package was deemed as safe to use. See the full health analysis review.

We found indications that slot-bot is an Inactive project. See the full package health analysis to learn more about the package maintenance status.