Based on project statistics from the GitHub repository for the npm package sg-protractor-tools, we found that it has been starred 26 times, and that 0 other projects in the ecosystem are dependent on it.

We found a way for you to contribute to the project! Looks like sg-protractor-tools is missing a Code of Conduct.

Further analysis of the maintenance status of sg-protractor-tools based on released npm versions cadence, the repository activity, and other data points determined that its maintenance is Inactive.

An important project maintenance signal to consider for sg-protractor-tools is that it hasn't seen any new versions released to npm in the past 12 months, and could be considered as a discontinued project, or that which receives low attention from its maintainers.

sg-protractor-tools has more than a single and default latest tag published for the npm package. This means, there may be other tags available for this package, such as next to indicate future releases, or stable to indicate stable releases.

This library provides a reusable and generic set of helper functions for the Protractor test framework, which SunGard is using for testing its HTML5-based user interfaces. It includes functions that simplify things like browser resizing, scrolling and memory usage tracking as part of a test suite. The project bundles an example application that showcases the functionality.

While using Protractor for testing our Angular-based applications, we have found that we can simplify many of the common tasks done as part of part of our test suite. The Protractor API is fairly low-level in some cases, and we have seen that we can cut down the amount of code for some common tasks by externalizing functionality into a reusable library.

The docs folder has more detailed information about the provided functionality, but here are some highlights:

The library provides functionality for tracking your app's memory consumption as part of a Protractor test. When running multiple iterations of the same operation, this can be used to detect memory leaks in your application's code. To make things as easy as possible, we have encapsulated the required code in a simple function that allows you to focus on your test. The library takes care of running your test a configurable number of times, and it also takes care of tracking the memory usage. Once the test has been completed, you can use the generated CSV file to analyze the memory usage, and you can also get a quick overview by taking a look at the generated PNG diagram. Here's an example: 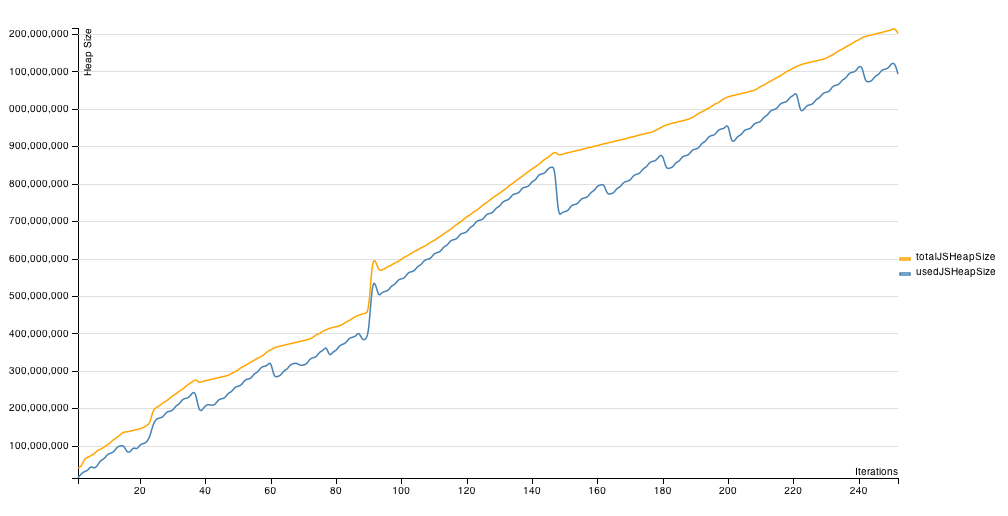 The above image shows an example diagram for a test case with 250 iterations. As you can see from the diagram, the used JS Heap size keeps increasing and is never reclaimed. Clearly someone hasn't been doing their homework, this is a pretty big memory leak!

Take a look at the memory.md file to see the API for running a test that's tracking memory consumption, and check out the memory.spec file for the library in action. The test code that you need to write is only a couple of lines:

Note: The memory tracking functionality only works in Google Chrome, when started with the enable-precise-memory-info and js-flags=--expose-gc flags. Other browsers currently don't expose a similar API. Take a look at the example/protractor.conf.js file to see the required configuration.

In addition to the memory tracking, the library also includes functions that simplify common tasks like

To include this library in your own project, use the following command:

This will include the library in your project's package.json file as a development dependency.

To use the library in your code, use the following code to import it:

This will expose the libraries main object as sgpt in your code. You can use the library's functions by referencing the sgpt object, e.g. for scrolling:

The library's functions are split up by their domain, e.g. all functions relating to resizing windows are grouped under the sgpt.resize object. Take a look at the docs folder for more information.

The example folder contains an example application with e2e tests that showcase how to use this library with Protractor.

The README.md file in the example folder lists all the tests that you can run, gives details about each one, as well as guidance on how to run them.

Detailed documentation on the library's functions can be found in the docs folder.

This project uses Git-Flow as its development model. Any changes need to be made against the develop branch.

Pull requests are welcome - please stick to the coding style used in the rest of the library. When adding/changing functionality, please provide/update the following:

Use the following commands to create a new release if required:

We found indications that sg-protractor-tools is an Inactive project. See the full package health analysis to learn more about the package maintenance status.

Is sg-protractor-tools safe to use?

While scanning the latest version of sg-protractor-tools, we found that a security review is needed. A total of 14 vulnerabilities or license issues were detected. See the full security scan results.