Based on project statistics from the GitHub repository for the npm package rolling-spider, we found that it has been starred 253 times, and that 7 other projects in the ecosystem are dependent on it.

We found a way for you to contribute to the project! Looks like rolling-spider is missing a security policy.

Further analysis of the maintenance status of rolling-spider based on released npm versions cadence, the repository activity, and other data points determined that its maintenance is Inactive.

An important project maintenance signal to consider for rolling-spider is that it hasn't seen any new versions released to npm in the past 12 months, and could be considered as a discontinued project, or that which receives low attention from its maintainers.

With more than 10 contributors for the rolling-spider repository, this is possibly a sign for a growing and inviting community.

We found a way for you to contribute to the project! Looks like rolling-spider is missing a Code of Conduct.

rolling-spider has more than a single and default latest tag published for the npm package. This means, there may be other tags available for this package, such as next to indicate future releases, or stable to indicate stable releases.

An implementation of the networking protocols (Bluetooth LE) used by the Parrot MiniDrone - Rolling Spider and Airborne Night Drone - MACLANE. This offers an off-the-shelf $99 USD drone that can be controlled by JS -- yay!

There are a few steps you should take when getting started with this. We're going to learn how to get there by building out a simple script that will take off, move forward a little, then land.

To connect you need to create a new Drone instance.

After you've created an instance you now have access to all the functionality of the drone, but there is some stuff you need to do first, namely connecting, running the setup, and starting the ping to keep it connected.

Taking off, moving, and landing

We're now going to create a function that takes a drone and then by using a sequence of temporal tasks creates a timed sequence of calls to actions on the drone.

We recommend using temporal over a series of setTimeout chained calls for your sanity. Please abide by this when playing with the drone and ESPECIALLY if filing a ticket.

And there you have it, you can now control your drone. 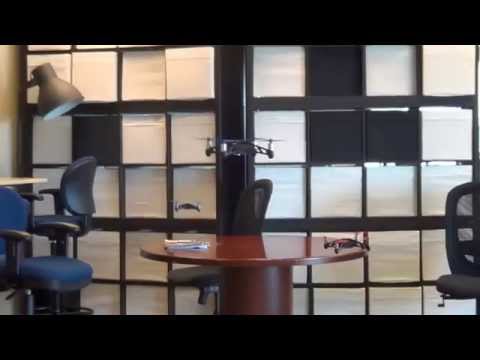 Previous versions of the rolling-spider library required you to specify the UUID for your drone through a discover process. This has been removed in favor of just using the first BLE device that broadcasts with "RS_" as its localname. If you are flying multiple minidrones or in a very populated BLE area, you will want to use the discovery process in order to identify specifically the drone(s) you want to control. Use the Discovery Tool to get the UUID of all nearby BLE devices.

If you want to fly multiple drones at once, please use the Swarm API for that. An example of the swarm, as well as other examples, is available in the eg/ directory. Source Code Sample

Connects to the drone over BLE. callback is invoked when it is connected or receives an error if there is a problem establishing the connection.

Sets up the connection to the drone and enumerate all of the services and characteristics. callback is invoked when setup completes or receives an error if there is a problem setting up the connection.

Event that is emitted on battery change activity. Caution, battery drains pretty fast on this so this may create a high velocity of events.

Sets the internal fly state to true, callback is invoked after the drone reports that it is hovering.

Sets the internal fly state to false, callback is invoked after the drone reports it has landed.

Makes the drone gain or reduce altitude. callback is invoked after all the steps are completed.

Causes the drone to spin. callback is invoked after all the steps are completed.

Controls the pitch. callback is invoked after all the steps are completed.

Controls the roll, which is a horizontal movement. callback is invoked after all the steps are completed.

Causes the drone to do an amazing front flip.

Causes the drone to do an amazing back flip.

Causes the drone to do an amazing left flip. DO NOT USE WITH WHEELS ON!!!

Causes the drone to do an amazing right flip. DO NOT USE WITH WHEELS ON!!!

Resets the trim so that your drone's flight is stable. It should always be called before taking off.

Obtains the signal strength as an RSSI value returned as the second parameter of the callback.

Disconnects from the drone if it is connected.

Causes the drone to shut off the motors "instantly" (sometimes has to wait for other commands ahead of it to complete... not fully safe yet)

If you have more than one (or ten) Rolling Spiders, you will eventually want to control them all as a single, somewhat unified swarm. This became such a common request, we made it part of the API for the RollingSpider. This will allow you to initialize a set of members, defined or otherwise, and broadcast commands to them all at once.

Options (anything additional is passed on to individual members upon initialization)

Initiates the swarm collection process. This will attempt to seek out bluetooth RollingSpiders that have been identified in the membership or isMember validation components and enrolls them into the swarm.

Stops the open membership process and sets the swarm to active.

Returns (or executes provided callback) with the swarm member that has the provided id value for localName or UUID. Use this to issue commands to specific drones in the swarm.

Returns true if the provide device should be admitted as a member of the swarm or false if it should be ignored. Can be overridden for more complex membership definition.

Releases all of the drones from the swarm.

All other commands for the swarm follow the command structure of an individual RollingSpider and it is broadcast to all roughly at the same time (bluetooth isn't always exact.) The signature is the same for all of the commands and passes options and a callback to the function.

The npm package rolling-spider receives a total of 6 weekly downloads. As such, rolling-spider popularity was classified as limited. Visit the popularity section on Snyk Advisor to see the full health analysis.

We found indications that rolling-spider is an Inactive project. See the full package health analysis to learn more about the package maintenance status.

Is rolling-spider safe to use?

While scanning the latest version of rolling-spider, we found that a security review is needed. A total of 12 vulnerabilities or license issues were detected. See the full security scan results.