Based on project statistics from the GitHub repository for the npm package postgraphile-form, we found that it has been starred 3 times.

We found a way for you to contribute to the project! Looks like postgraphile-form is missing a Code of Conduct.

Further analysis of the maintenance status of postgraphile-form based on released npm versions cadence, the repository activity, and other data points determined that its maintenance is Inactive.

An important project maintenance signal to consider for postgraphile-form is that it hasn't seen any new versions released to npm in the past 12 months, and could be considered as a discontinued project, or that which receives low attention from its maintainers.

postgraphile-form has more than a single and default latest tag published for the npm package. This means, there may be other tags available for this package, such as next to indicate future releases, or stable to indicate stable releases.

For a quick demo, visit: graphql_form

This project was set out to create form for submitting data with a graphql server. The setup was specifically dealing the GraphQL Input Object in mutations, like in the following form: (Result of a __type query):

Does not handle custom scalar type other than Date/Time, BigFloat, BigInt

Designed to work best with PostGraphile

Following the PostGraphile definition of mutations, it uses ModelInput when form is to create a new model, and uses ModelPatch when form is to update a model. For both BigFloat and BigInt, it currently still uses , which still converts to a Number (instead of String).

Enum type is handled as a Select dropdown.

User can provide their own widget for in a text: React.Component mapping. The variable name is customWidgets. The component will be provided a "value" and "onChange". The onChange function should be called with the new value to change the value in the form.

User can supply a mapping of validator and rules for each field that will be used by async-validator. variable name are "customValidators" and "customRules". You can find more about the "validator" function and "rule" object in the antd form doc. The User can also provide a mapping of decorators (customDecorators), the decorator is also documented in antd form. The decorator sets many ectra things such as the label, it also allows validator and rules, but they will be overwritten by the customValidators and customRules.

Auto validate the fields before submit

If an onSubmit function is passed in, the onSumit function will be called with a "form" object, which has several important functions, such as getFieldsData, validateFields, getFieldsError etc. The function will not be called if the input is invalid. The validation is done using another library (embedded in the form) async-validator. This form is created by Antd Form.create() hoc, which internally uses rc-form

The components are developed with typescript 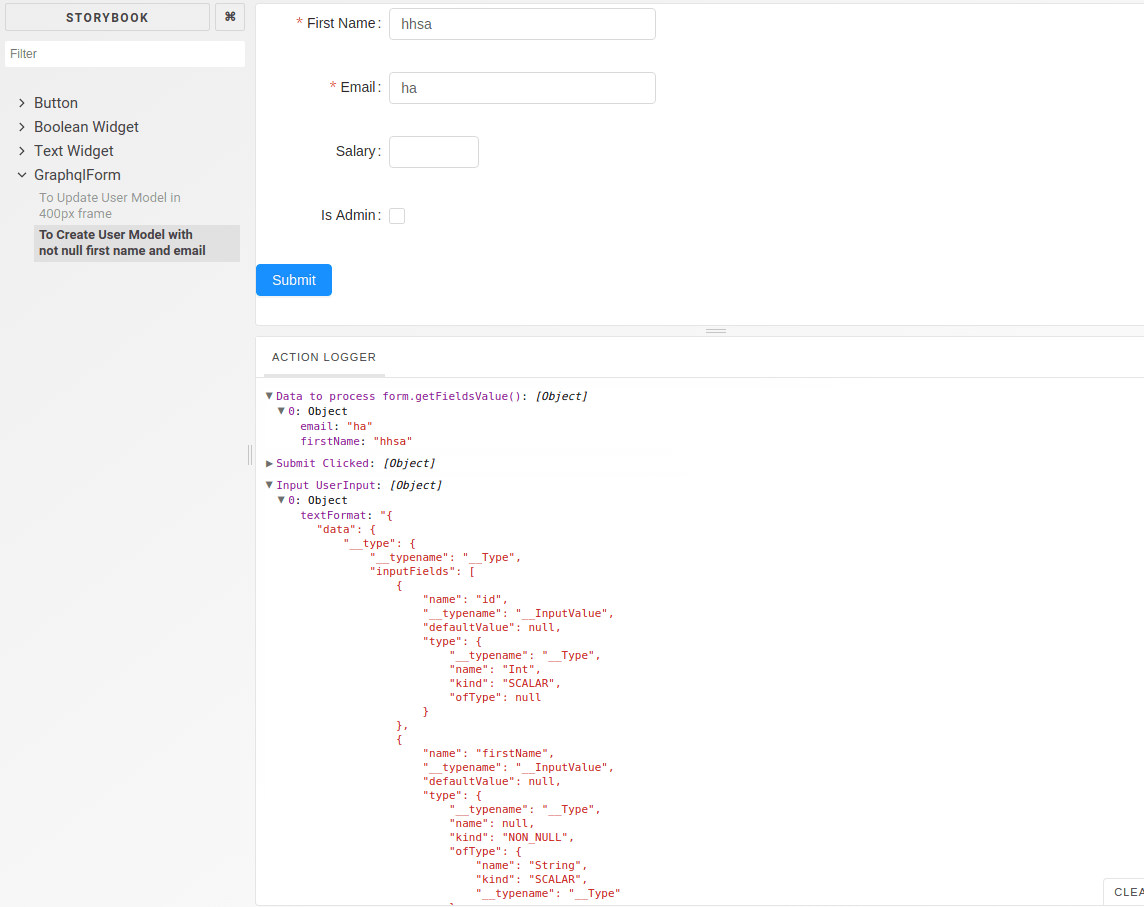 Not ready for publish to NPM yet, working on doc and refactoring.

Simply import the GraphqlForm object and pass in modelName and onSumit to generate a form.

The project was made originally for a project with PostGraphile, so a lot of features were leaning toward it. A great follow up feature would be:

Use a Select for a association

The input object generated by PostGraphile are all scalar including foreignKeys, so it is not possible to know its association, however, the model may have associated inflectors, for example, a PostInput will have a userId inputField that is Int, but the Post object may have a field called UserByUserId, that is a "User" object. Using this combined information, the library may be able to "guess" the association on a field, and render a Select dropdown for belongs_to association. However, if --simplify-inflector is used, then it will be harder todo.

Handle other type of data from postgres

Postgresql table field can be many other data types, such as List, which is not supported yet.

We found indications that postgraphile-form is an Inactive project. See the full package health analysis to learn more about the package maintenance status.

Is postgraphile-form safe to use?

The npm package postgraphile-form was scanned for known vulnerabilities and missing license, and no issues were found. Thus the package was deemed as safe to use. See the full health analysis review.