Based on project statistics from the GitHub repository for the npm package postcss-xml-transform, we found that it has been starred 77 times, and that 0 other projects in the ecosystem are dependent on it.

We found a way for you to contribute to the project! Looks like postcss-xml-transform is missing a Code of Conduct.

Further analysis of the maintenance status of postcss-xml-transform based on released npm versions cadence, the repository activity, and other data points determined that its maintenance is Inactive.

An important project maintenance signal to consider for postcss-xml-transform is that it hasn't seen any new versions released to npm in the past 12 months, and could be considered as a discontinued project, or that which receives low attention from its maintainers.

postcss-xml-transform has more than a single and default latest tag published for the npm package. This means, there may be other tags available for this package, such as next to indicate future releases, or stable to indicate stable releases. 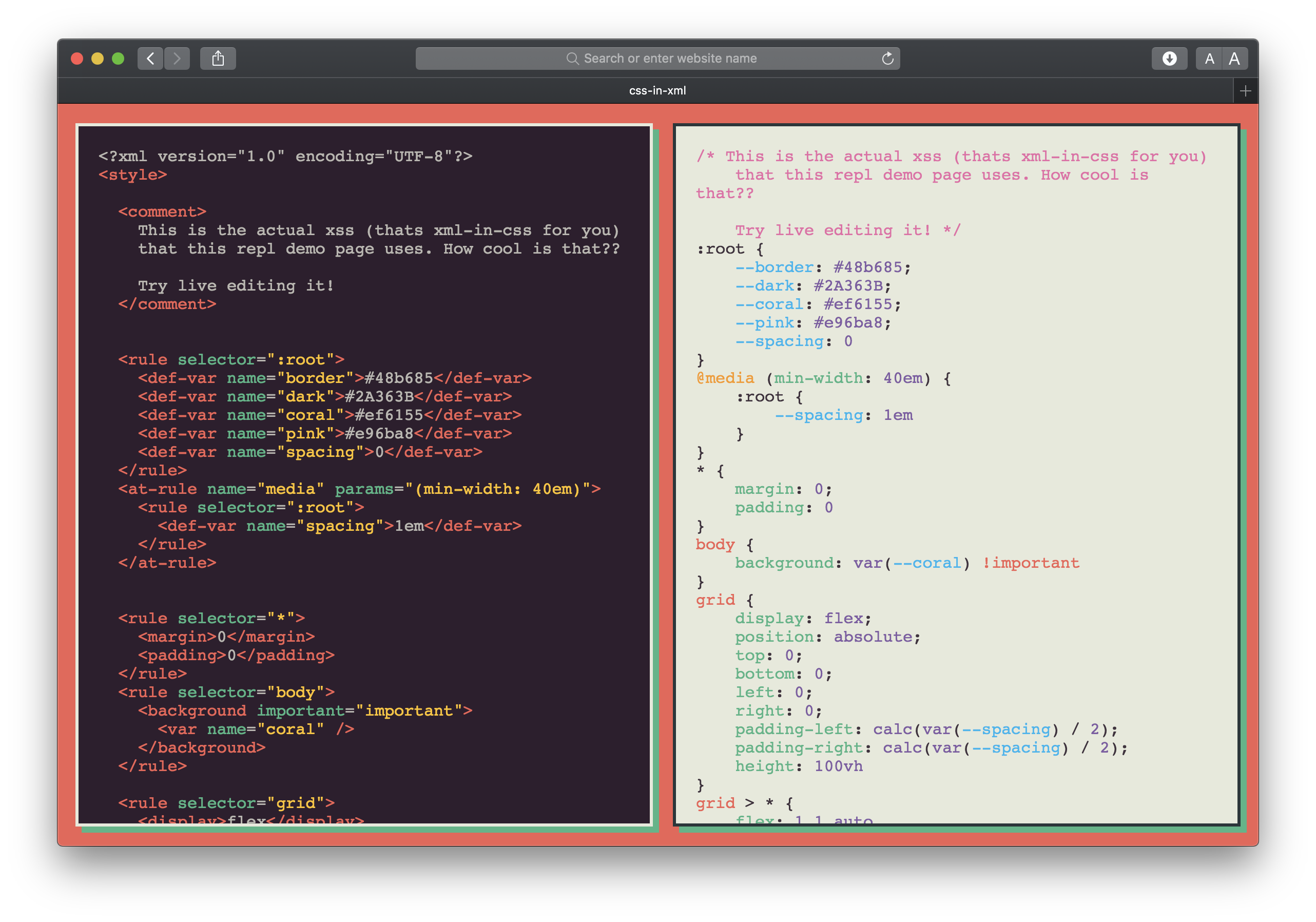 Use xss as a parser.

What can I use this library for?

Imagine this, you hold a senior position at a company you hate. You write up a compelling case for css in xml, something about the Android developers having an easier time with this because android uses xml. Probably. Nobody in your company really cares enough about the Android app to even know do they. You lead a team for two months to rewrite the entire CSS stack in this abhorrent XML thing. It should actually work with css modules and stuff. Hell you could even write a jsx pragma. You leave. Retire to the Bahamas for a bunch of months. The company you hated all along now has to maintain this. You sip a strawberry mojito in the beach and pet a bird. Things are good. You made it.

Hahahsahjbddsvufbf of course not I already had enough trouble rationalizing how separate the parsers for the declaration xml and the root xml should be to bother writing anything up.

Please refer to the test page or to the three files of code that i refactored so thoroughly that everything is now an abstract mess nobody can follow. I don't even know how this works. it's amazing. i love it.

Can I use the stringify method?

Can I donate to help support development of this project?

I will donate to your project if you use this.

Are you aware XSS already stands for Cross Site Scripting?

Yes but THAT should actually be called css. it's not ny fault whatever commitee came up with that name wanted to sound 'radical' or 'extreme' because their legal guardians didnt get them those sneakers with built in rollerblades. Once this project gains traction I will submit as formal proposal to rename cross site scripting to css as it always should have been called

But what about the existing CSS then?

I asked alexa for cascade synonyms and she says we should use waterfalling style sheets. WSS. There, fixed.

We found indications that postcss-xml-transform is an Inactive project. See the full package health analysis to learn more about the package maintenance status.

Is postcss-xml-transform safe to use?

While scanning the latest version of postcss-xml-transform, we found that a security review is needed. A total of 1 vulnerabilities or license issues were detected. See the full security scan results.