Based on project statistics from the GitHub repository for the npm package node-red-contrib-quantum, we found that it has been starred 13 times, and that 0 other projects in the ecosystem are dependent on it.

We found a way for you to contribute to the project! Looks like node-red-contrib-quantum is missing a Code of Conduct.

Further analysis of the maintenance status of node-red-contrib-quantum based on released npm versions cadence, the repository activity, and other data points determined that its maintenance is Inactive.

An important project maintenance signal to consider for node-red-contrib-quantum is that it hasn't seen any new versions released to npm in the past 12 months, and could be considered as a discontinued project, or that which receives low attention from its maintainers.

node-red-contrib-quantum has more than a single and default latest tag published for the npm package. This means, there may be other tags available for this package, such as next to indicate future releases, or stable to indicate stable releases.

Node-RED Quantum provides a set of nodes to build and run quantum computing algorithms within Node-RED.

Please be aware that this is a development version of Node-RED Quantum, it is still a work in progress and the code is unstable.

The aim of this module is to help introduce users to quantum computing by providing a library of highly documented nodes for building and running quantum circuits in Node-RED. It was designed to facilitate the integration of quantum algorithms within classical programs, and allows for scalability by providing the fundamental quantum circuit building blocks.

For detailed documentation on how to use each node, please head to the Node-RED Quantum wiki.

For the latest changes, please read the CHANGELOG. 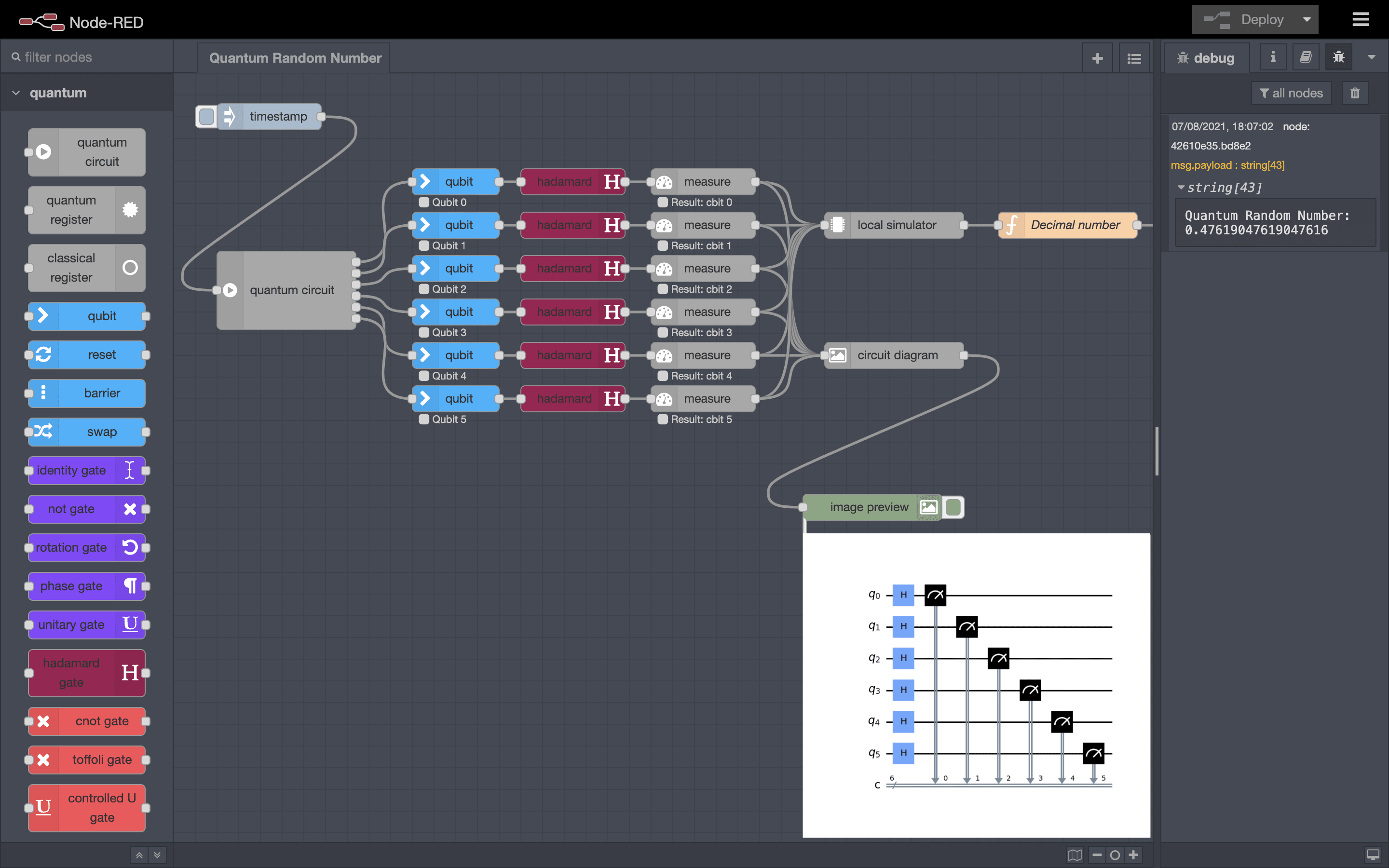 Node-RED Quantum requires at minimum Node.js 12.0.0, Node-RED 1.0, and Python 3. It is also advised that you start Node-RED from a Bash shell, as it is required to prepare the Python virtual environment.

Even though not required, some knowledge on how to use the Node-RED platfom can be useful. We recommend this Node-RED tutorial on YouTube. 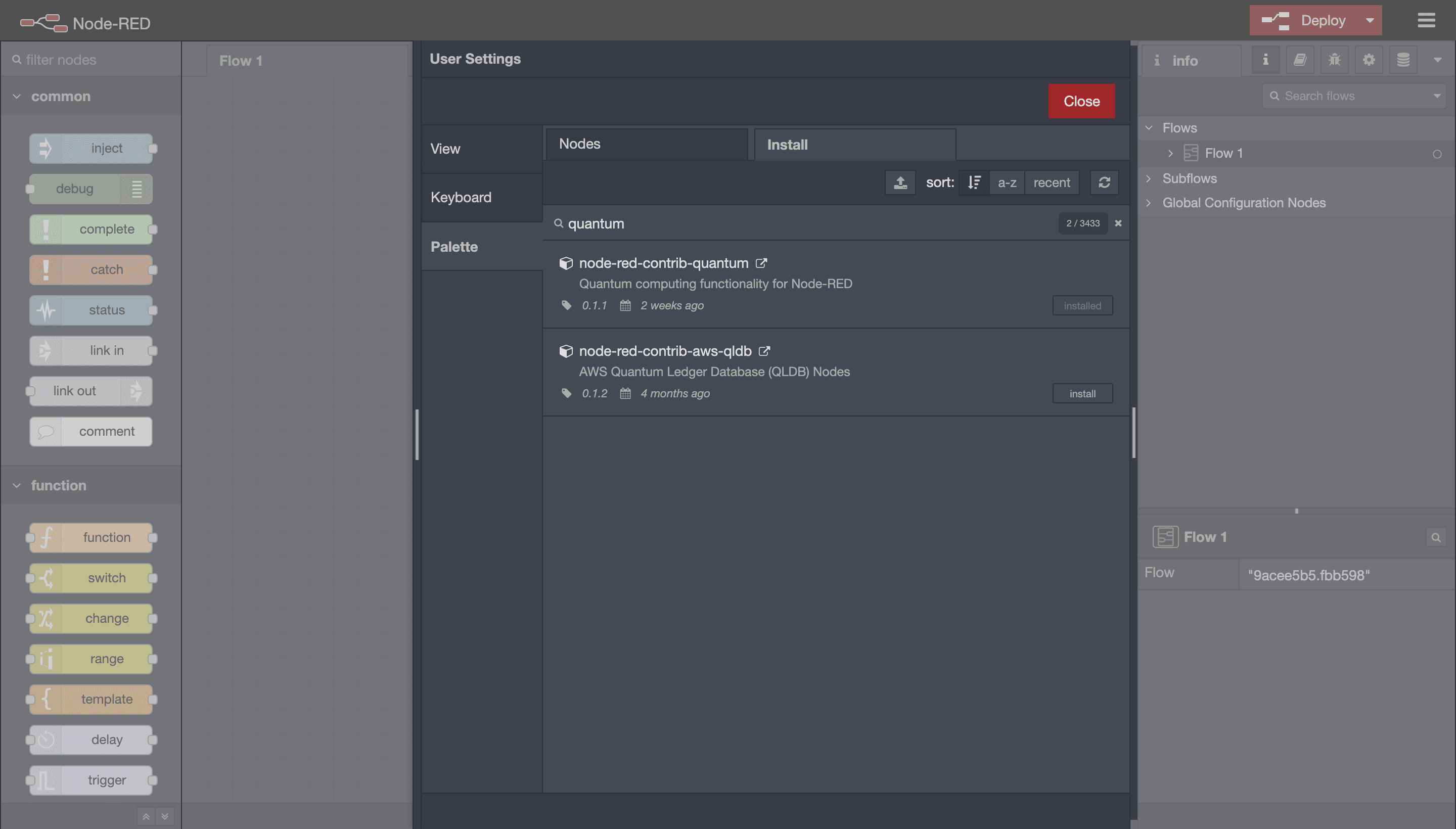 An alternative method of installation is to set up a Docker environment:

A qubit is the same to a quantum computer as what a bit is to a classical computer: the smallest unit of information.

The Bloch sphere representation is considered the most simple and ludic way to understand & visualise a qubit (see example below). In contrast with classical bits that can only be in a '0' or a '1' state, qubits can store much more information. In fact, all points on the sphere represent a different qubit state, the usual classical bit states being labelled as:

Quantum states that are in between those 2 points are a weighted combination of the '0' and '1' states. This is called superposition. To set the qubit in a particular state, we operate rotations or reflections of the Bloch sphere while keeping the x, y and z axis unchanged.

The Qiskit textbook provides more information on classical vs quantum bits, as well as bloch spheres.

Applying a π radians rotation about the x-axis on a qubit that is in the '0 state' will put it in the '1 state'. 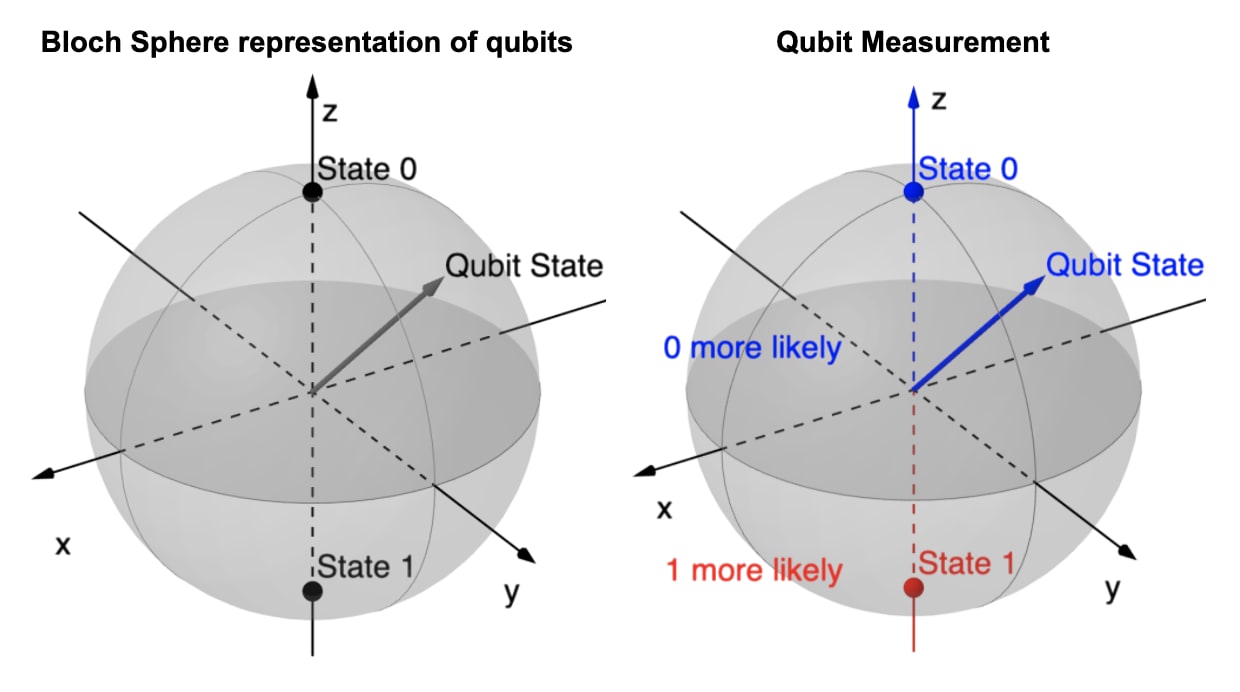 It is very important to understand that even though a qubit can take an infinite number of states, modern technology only allows us to measure '0' or '1', same as a classical bit. Since we measure and interpret a qubit state using classical machines, this can be seen as a projection of quantum computing back to classical computing: from quantum states back to binary values.

This leads to probabilistic measurement results. In terms of the Bloch Sphere, the closest the qubit state is from the '1' state, the more likely we are to measure a '1'.

Referred to as a "spooky action at a distance" by Albert Einstein, entanglement is a quantum phenomenon that is extremely powerful in quantum computing; it is a form of connection that can exist between any number of qubits. Here we will illustrate entanglement between two qubits.

Two qubits are said to be entangled when their relative states rely on each other. In other words, changing or knowing the state of one qubit can change the state of the other qubit. This connection is independent of time and space: the two qubits can be miles appart and the connection will still be instantaneous.

In practice, entanglement arises when the operation of a gate on a qubit is conditional on the state of another qubit (similar to an if block in classical computing). These gates are often referred to as multi-qubits quantum gates.

More information on entanglement can be found in the Qiskit Textbook

The 2 qubits are now entangled: if we measure one of them to be in a specific state, then we know the other one will be in the same state.

Node-RED Quantum includes a 'quantum' library of nodes that can be used to build quantum circuits.

The 'Quantum Circuit' node can generate a quantum circuit with qubits. The qubits will then flow through a certain set of nodes corresponding to quantum operations, or gates. Finally, all qubits must be connected to a single output node that will process the circuit and output the results.

The nodes are organised into 4 categories:

More information on 'quantum' nodes can be found in the Node-RED Quantum wiki.

Node-RED Quantum includes a 'quantum algorithm' library of nodes that can be used to leverage the power of quantum computing in classical programs.

The nodes do not require any specific quantum knowledge to be used, except for some initial knowledge on the algorithm itself to have a better understanding of its use.

Those nodes encapsulate all the quantum-related operations so that users just have to input the right data in order to receive the quantum algorithm output.

More information on 'quantum algorithm' nodes can be found in the Node-RED Quantum wiki.

For information on how to contribute, please read the CONTRIBUTING guidelines.

For details on the authors, please read the AUTHORS file.

This Node-RED library was developed in the context of a UCL IXN partnership with IBM. Defined and arranged by IBM, the project was allocated to students from UCL's Computer Science Department as part of their Master's thesis. Special thanks to John McNamara for overseeing the development of this project, to David Clark and Rae Harbird for their supervision as Academic Supervisors, and to Sieglinde Pfaendler and James Wootton for their advice and guidance as our Quantum Mentors.

We found indications that node-red-contrib-quantum is an Inactive project. See the full package health analysis to learn more about the package maintenance status.

Is node-red-contrib-quantum safe to use?

While scanning the latest version of node-red-contrib-quantum, we found that a security review is needed. A total of 1 vulnerabilities or license issues were detected. See the full security scan results.