Based on project statistics from the GitHub repository for the npm package node-red-contrib-alpaca, we found that it has been starred 4 times.

We found a way for you to contribute to the project! Looks like node-red-contrib-alpaca is missing a Code of Conduct.

Further analysis of the maintenance status of node-red-contrib-alpaca based on released npm versions cadence, the repository activity, and other data points determined that its maintenance is Inactive.

An important project maintenance signal to consider for node-red-contrib-alpaca is that it hasn't seen any new versions released to npm in the past 12 months, and could be considered as a discontinued project, or that which receives low attention from its maintainers.

node-red-contrib-alpaca has more than a single and default latest tag published for the npm package. This means, there may be other tags available for this package, such as next to indicate future releases, or stable to indicate stable releases.

I've decided to re-integrate everything into one package again, v2.0 and v2.1 were both structured with two complementary packages one mandatory "auth-config" and one optional "simple" set of nodes. If you were using the node-red-contrib-alpaca-simple package then those nodes will give a "Type already registered" error - however it won't let you remove them through the palette manager, same with the alpaca-config node.

If you are getting these errors run from your .node-red directory:

If you have any problems, raise an issue on GitHub.

This project wraps the official Node.js library for Alpaca into useful nodes for Node-RED.

Node-RED is a visual programming tool based on NodeJS. Alpaca is a US stock trading API.

In v2.0.0 this package has been pared down to just two nodes.

If you updated and are now missing nodes, search instead for "node-red-contrib-alpaca-simple". 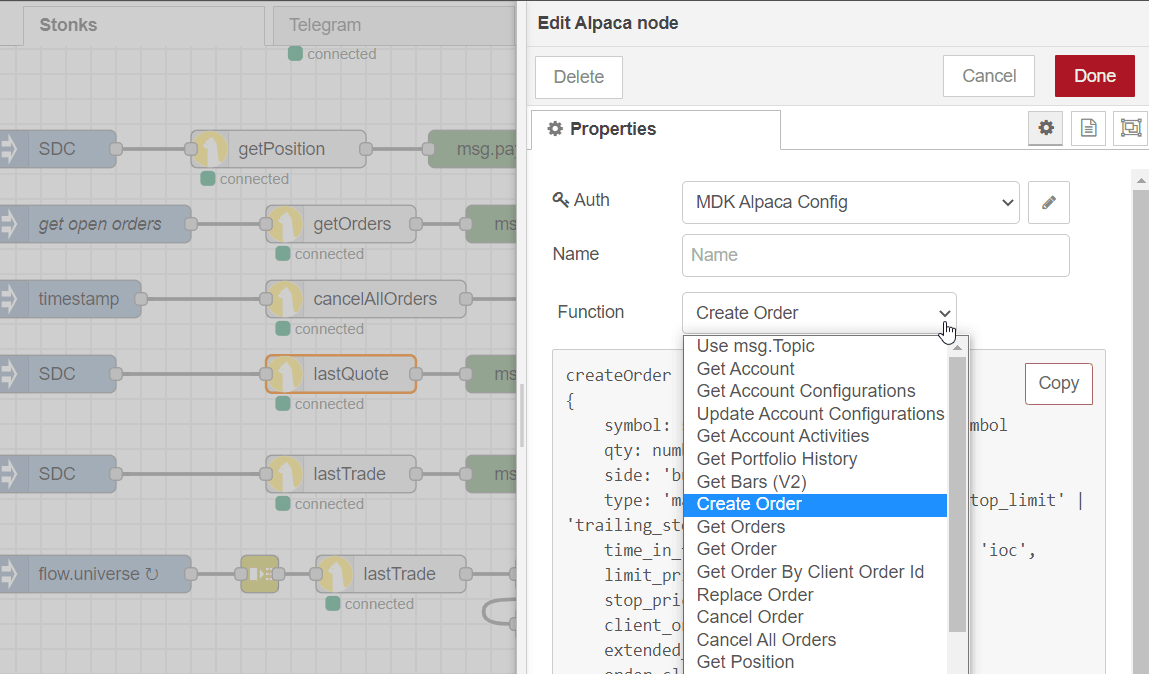 This node provides access to any of the basic functions in the official SDK. In general the node is designed to be the simplest possible wrapper for the SDK.

The internal processing can be described as follows:

The function can be set by msg.topic, or by using the dropdown in the node configuration panel. To guide your programming, an example / template input will appear in the config panel when the selection changes. 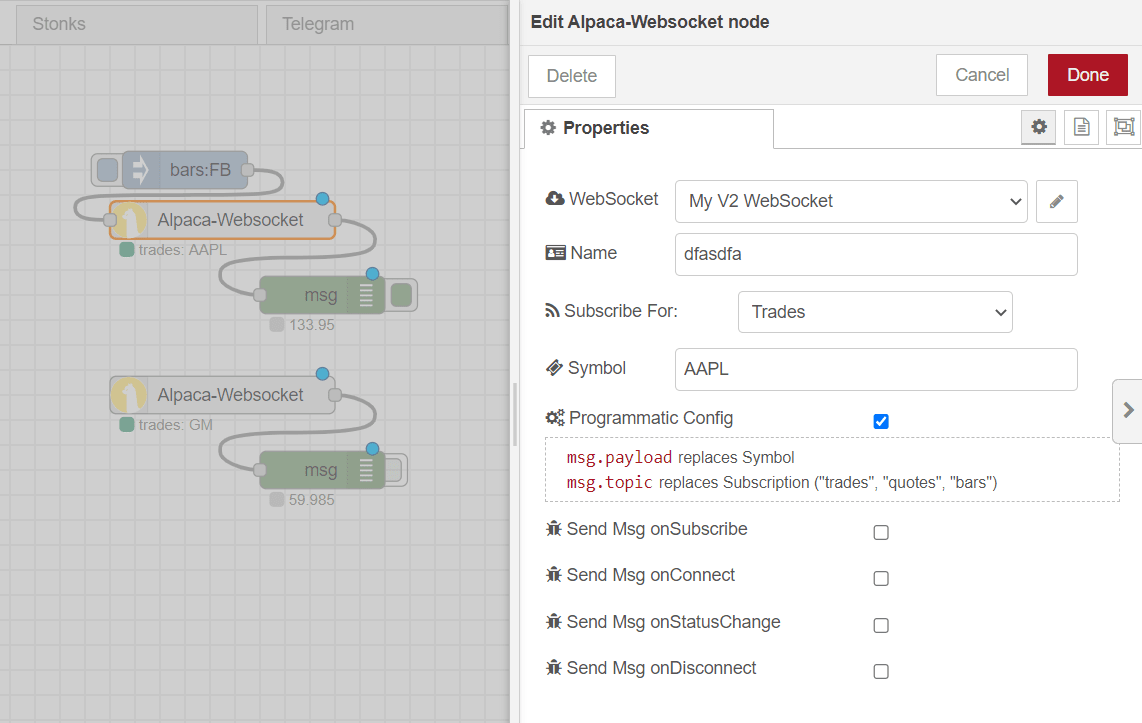 By default the listener nodes connect to the symbol and subscription defined in the configuration panel. If you check the "Programmatic Config" option then an input connection becomes available. This input will accept a new symbol and/or subscription to update the listener in real time. Symbol will always be replaced by msg.payload but the subscription will only be replaced if it is one of the valid subscriptions: "trades", "quotes", or "bars".

We found indications that node-red-contrib-alpaca is an Inactive project. See the full package health analysis to learn more about the package maintenance status.

Is node-red-contrib-alpaca safe to use?

While scanning the latest version of node-red-contrib-alpaca, we found that a security review is needed. A total of 1 vulnerabilities or license issues were detected. See the full security scan results.