The npm package node-monitor receives a total of 43 downloads a week. As such, we scored node-monitor popularity level to be Limited.

Based on project statistics from the GitHub repository for the npm package node-monitor, we found that it has been starred 24 times, and that 1 other projects in the ecosystem are dependent on it.

We found a way for you to contribute to the project! Looks like node-monitor is missing a Code of Conduct.

Further analysis of the maintenance status of node-monitor based on released npm versions cadence, the repository activity, and other data points determined that its maintenance is Inactive.

An important project maintenance signal to consider for node-monitor is that it hasn't seen any new versions released to npm in the past 12 months, and could be considered as a discontinued project, or that which receives low attention from its maintainers.

node-monitor has more than a single and default latest tag published for the npm package. This means, there may be other tags available for this package, such as next to indicate future releases, or stable to indicate stable releases.

The current project is representing the implementation of Monitis custom monitor approach that evaluates the health state of Node.js servers. It is composed of two part - javascript plugin for Node.js server and bash script that periodically connects to Node.js server Monitor plugin, receives, process and sends measured parameters of server and evaluation of server health status into Monitis via the Monitis open API. Since Node.js itself doesn't exist the embeded stats module we had to create the plugin part that accumulates some pure statistics and sends it by HTTP channel by request. The script part provides the main processing, packing and sending information to the Monitis main server. Because the plugin is implemented by using events-driven technology and only just collects information, it adds in fact very insignificant additional load to the existing server and practically don't affect on server performance - the main processing is done in remote script part. The main purpose of current project is to show the possible way of using Monitis Open API for monitoring Node.js servers. Naturally, a different variations of the presented code can be made in accordance user needs. The current project presents only one from many possible solutions.

The current version can contains some specific custom part for collect which exist in the request header. For instance, the following POST request contains custom part ('mon-platform' and 'mon-version') that can be processed

Generally, this monitor architecture can be depicted as the following 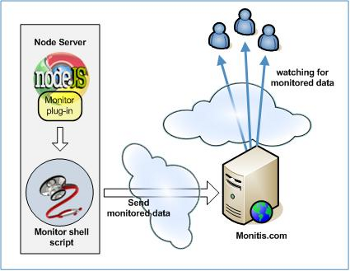 Getting as a Node.js module

You can get the monitor as NPM module by using the following command
(make sure beforehand, that you are in the root folder of your server project)

and next use it as an embedded Node.js module (see below).

The activation of monitor pluging can be done very easily

You need to add the following two lines in your code

Note that all items of options parameter are optional and when you don't specify any options the monitor will work by using default values.
As soon you register the monitor for your server by calling Monitor method, the monitor will be collecting the measuring data
and sending them by HTTP request that should correspond to the following pattern.

Please note that monitor plugin listens requests from everywhere so, the port 10010 should be open to access from outside.
The such requests are done by bash script part of monitor.

The shell scrip will periodically ask node server plugin for measured data.
If Node server doesn't start yet or down, the script will send corresponding information to the monitis (Server DOWN).
As Node server will be available, the measurements will be grabbing and sending to the monitis.

That's all. Now you can controlling the script by the following command

and monitoring process will be started, stopped or restarted.
Please note also that the script run as a daemon process so it will works even when your session will be closed.

You can also getting monitoring data from monitis

To do so you should use nmon_getdata.sh script by following pattern

Notice that all parameters are optional.
The monitor registration ID should be specified in extreme situation only, e.g. if you have several monitors with same name or some monitor was deleted by accidentally but its data is very important.

There are some dependencies for monitor plugin

The shell script use cUrl package to provide HTTP access to the Monitis server and monitor plugin.

To check the correctness of monitor workability, some Node test-servers are included in the package.
So, you can start Node server by command

Double-clicking on any line can be switching fixed (tabular view) to the flexible one.

You can also see the grafical view for any numerical values. 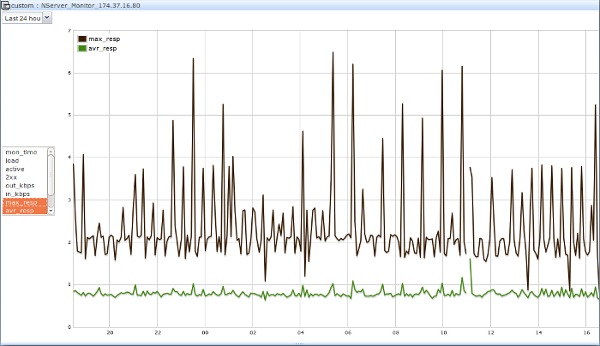 It can be noticed that the testing Node server is alive and have quite good state.

The npm package node-monitor receives a total of 43 weekly downloads. As such, node-monitor popularity was classified as limited. Visit the popularity section on Snyk Advisor to see the full health analysis.

We found indications that node-monitor is an Inactive project. See the full package health analysis to learn more about the package maintenance status.

Is node-monitor safe to use?

The npm package node-monitor was scanned for known vulnerabilities and missing license, and no issues were found. Thus the package was deemed as safe to use. See the full health analysis review.