The npm package markmon receives a total of 18 downloads a week. As such, we scored markmon popularity level to be Limited.

Based on project statistics from the GitHub repository for the npm package markmon, we found that it has been starred 173 times, and that 0 other projects in the ecosystem are dependent on it.

We found a way for you to contribute to the project! Looks like markmon is missing a Code of Conduct.

Further analysis of the maintenance status of markmon based on released npm versions cadence, the repository activity, and other data points determined that its maintenance is Inactive.

An important project maintenance signal to consider for markmon is that it hasn't seen any new versions released to npm in the past 12 months, and could be considered as a discontinued project, or that which receives low attention from its maintainers.

markmon has more than a single and default latest tag published for the npm package. This means, there may be other tags available for this package, such as next to indicate future releases, or stable to indicate stable releases. 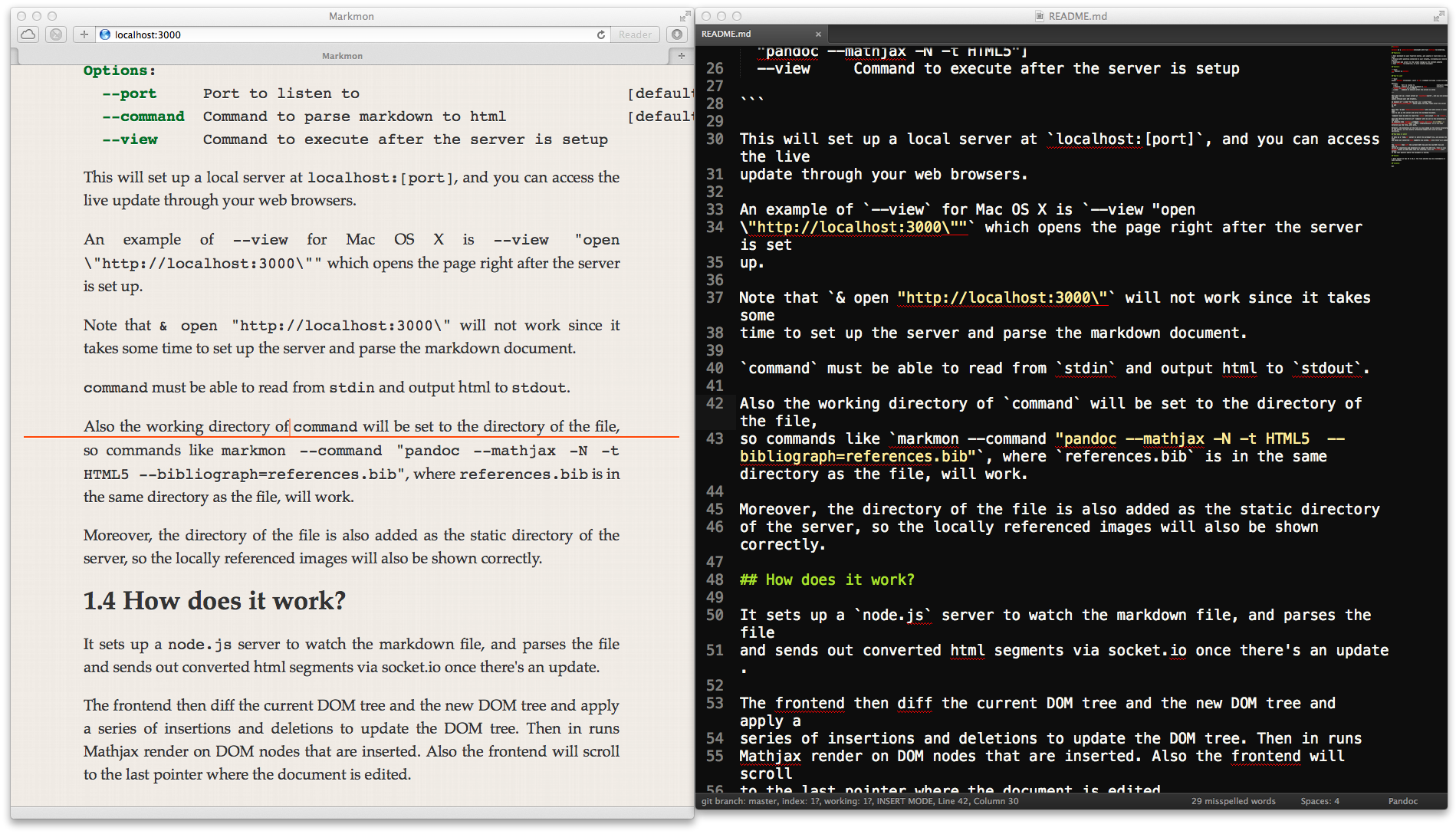 While this is built mainly for pandoc and Mathjax, it should also work for other markdown parsers in general. Though you should really check out pandoc if you haven't.

Also note that markmon does not contain a parser itself.

This will set up a local server at localhost:[port], and you can access the generated html through your web browsers.

Note that & open "https://localhost:3000\" will not work since it takes some time to set up the server and parse the markdown document.

command must be able to read from stdin and output html to stdout.

You can also separately specify a project directory which will be used to override the working directory.

Moreover, if no file name is specified, markmon will run in server mode: it will listen at the port for PUT requests of markdown documents and convert them into html with the command specified, then broadcast the final html snippet to all sockets. This can be useful for plugins etc.

How does it work?

It sets up a node.js server to watch the markdown file, and parses the file and sends out converted html segments via socket.io once there's an update.

The frontend then diff the current DOM tree and the new DOM tree and apply a series of insertions and deletions to update the DOM tree. Then it runs Mathjax render only on DOM nodes that are inserted. So in general the DOM update and Mathjax rendering should be fast.

The diff algorithm is an optimized and recursive version of the classic Levenshtein distance algorithm which runs in roughly Nd time, where N is the length of the document and d is the length of change in terms of the dom elements. So it is very fast for most cases, even if your document is large.

The npm package markmon receives a total of 18 weekly downloads. As such, markmon popularity was classified as limited. Visit the popularity section on Snyk Advisor to see the full health analysis.

We found indications that markmon is an Inactive project. See the full package health analysis to learn more about the package maintenance status.

Is markmon safe to use?

While scanning the latest version of markmon, we found that a security review is needed. A total of 20 vulnerabilities or license issues were detected. See the full security scan results.