Based on project statistics from the GitHub repository for the npm package jp.keijiro.kino.post-processing, we found that it has been starred 1,465 times, and that 0 other projects in the ecosystem are dependent on it.

We found a way for you to contribute to the project! Looks like jp.keijiro.kino.post-processing is missing a Code of Conduct.

Further analysis of the maintenance status of jp.keijiro.kino.post-processing based on released npm versions cadence, the repository activity, and other data points determined that its maintenance is Inactive.

An important project maintenance signal to consider for jp.keijiro.kino.post-processing is that it hasn't seen any new versions released to npm in the past 12 months, and could be considered as a discontinued project, or that which receives low attention from its maintainers.

jp.keijiro.kino.post-processing has more than a single and default latest tag published for the npm package. This means, there may be other tags available for this package, such as next to indicate future releases, or stable to indicate stable releases.

Streak adds horizontally stretched bloom that roughly resembles anamorphic lens flares. Although it's neither physically correct nor energy conserving, it's handy to emphasize shininess of the scene in just a few clicks. 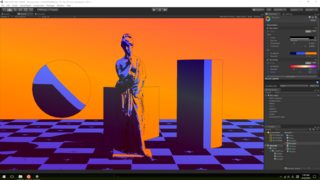 Recolor is a kind of false color effect that replaces image colors by mapping luminance to a given gradient. It also supports edge detection effect to add contour lines to the images.

Overlay simply adds a color gradient to the final output of the post process. It's handy to widen the color spectrum of the output in a nearly subliminal level.

Glitch is a collection of simple video glitch effects.

A simple sharpen filter that is similar to ones used in paint software.

A multi-purpose filter that provides several small effects in a single pass. 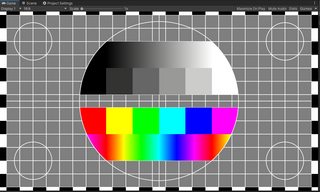 To the dependencies section:

After changes, the manifest file should look like below:

Nothing happens when I add effects to a volume

Check the Default HDRP Settings in the Project Settings. You have to define custom post processing orders to make them take effect in the pipeline. 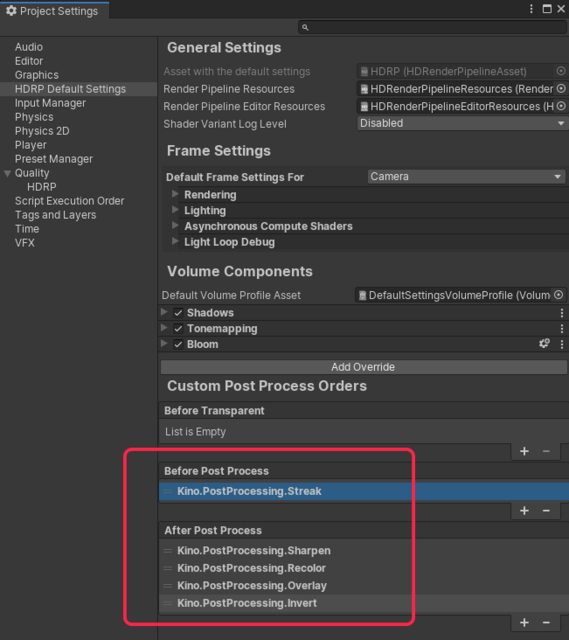 We found indications that jp.keijiro.kino.post-processing is an Inactive project. See the full package health analysis to learn more about the package maintenance status.

Is jp.keijiro.kino.post-processing safe to use?

The npm package jp.keijiro.kino.post-processing was scanned for known vulnerabilities and missing license, and no issues were found. Thus the package was deemed as safe to use. See the full health analysis review.