The npm package grunt-ec2 receives a total of 10 downloads a week. As such, we scored grunt-ec2 popularity level to be Limited.

Based on project statistics from the GitHub repository for the npm package grunt-ec2, we found that it has been starred 190 times, and that 5 other projects in the ecosystem are dependent on it.

We found a way for you to contribute to the project! Looks like grunt-ec2 is missing a Code of Conduct.

Further analysis of the maintenance status of grunt-ec2 based on released npm versions cadence, the repository activity, and other data points determined that its maintenance is Inactive.

An important project maintenance signal to consider for grunt-ec2 is that it hasn't seen any new versions released to npm in the past 12 months, and could be considered as a discontinued project, or that which receives low attention from its maintainers.

grunt-ec2 has more than a single and default latest tag published for the npm package. This means, there may be other tags available for this package, such as next to indicate future releases, or stable to indicate stable releases.

Abstracts away aws-sdk allowing you to easily launch, terminate, and deploy to AWS EC2 instances.

Note: This is a very, very opinionated package. You're invited to fork it and produce your own flow, and definitely encouraged to create pull requests with your awesome improvements.

Jump to the task reference to see what it can do.

This is pretty feature packed

You'll need to set up the AWS configuration for the project. You'll also need to have a Security Group set up on AWS. Make sure to enable rules for inbound SSH (port 22) and HTTP (port 80) traffic.

Then, in your whatever.json file:

You'll need to get an access key pair for AWS, as well as create a security group on AWS by hand. Creating security groups is not supported by this package yet.

The package.json entry is used to take the version number when deploying.

For the ec2 configuration, I don't take an object directly to encourage hiding away the deployment variables, granting them only to people who can actually perform deploys. You could provide an object directly, but it's strongly discouraged.

If you're confident enough, you can use the tool with just those options. Here is the full set of options and their defaults.

Although this package exposes quite a few different tasks, here are the ones you'll want to be using directly.

Launches an instance and sets it up. 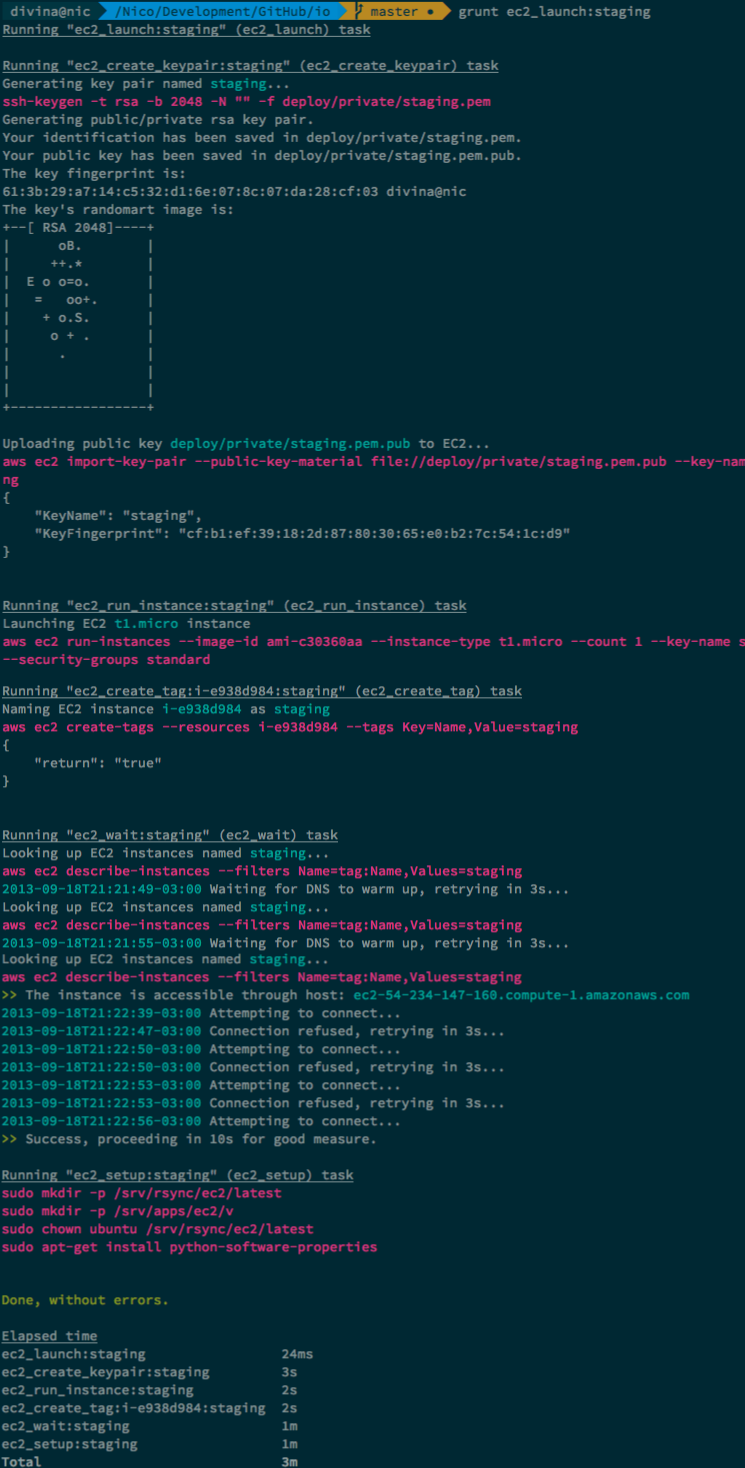 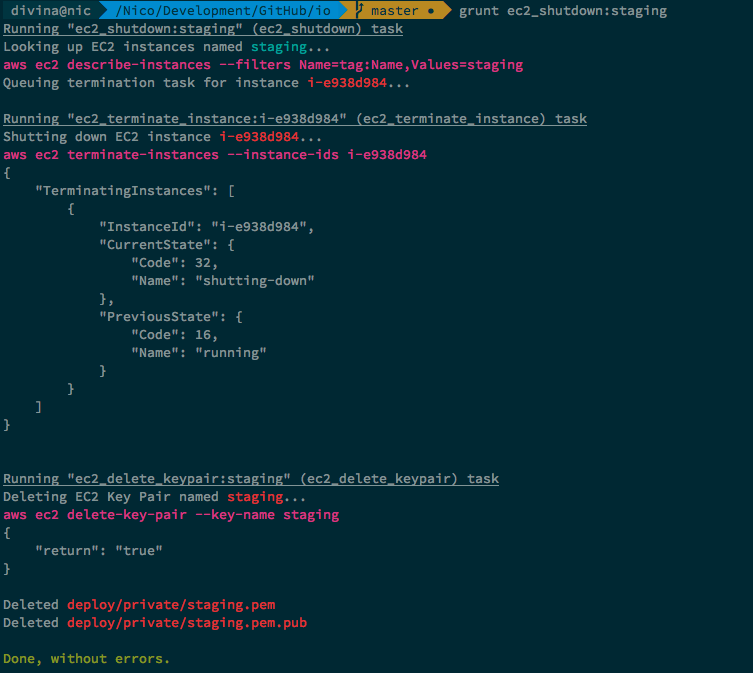 Returns a JSON list of running EC2 instances. Defaults to filtering by running state. You can use ec2-list-json:all to remove the filter, or pick another instance-state-name to filter by. 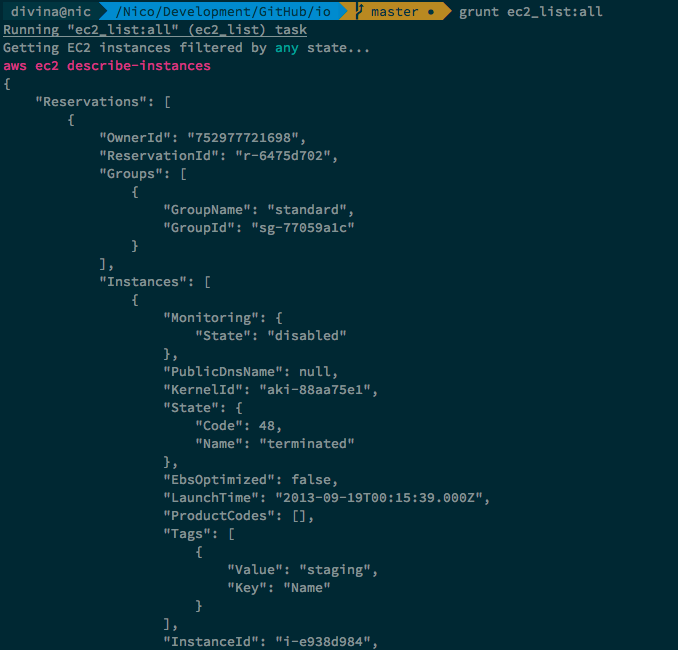 Describe an instance with ec2-lookup

Similar to ec2-list-json, but lets you get the properties of an instance by name, rather than state. Try it with grunt ec2-lookup:staging.

Get an SSH connection command for an instance ec2-ssh-text:name

Gives you a command you can copy and paste to connect to an EC2 instance through SSH. Useful to get down and dirty. 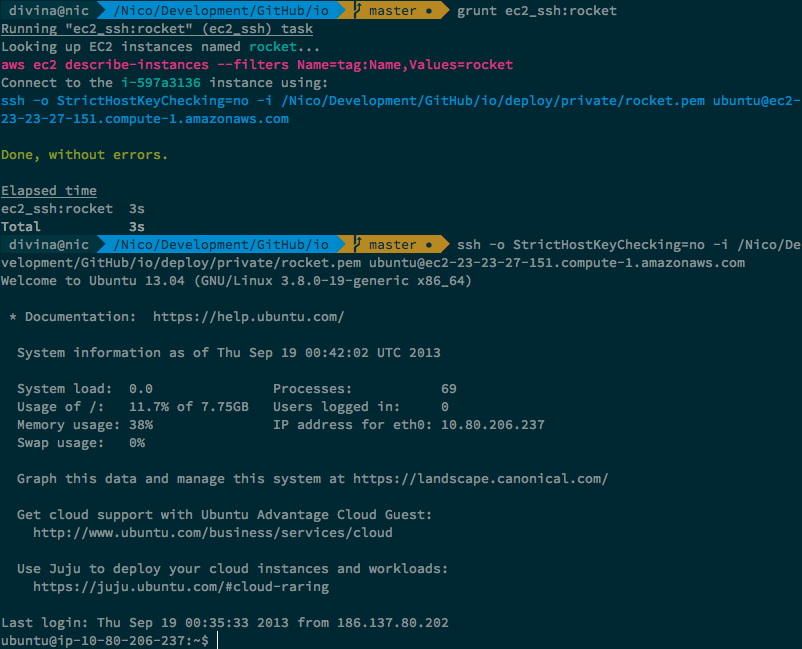 Deploy to an EC2 instance ec2-deploy

Deploys to a running EC2 instance using rsync over SSH. 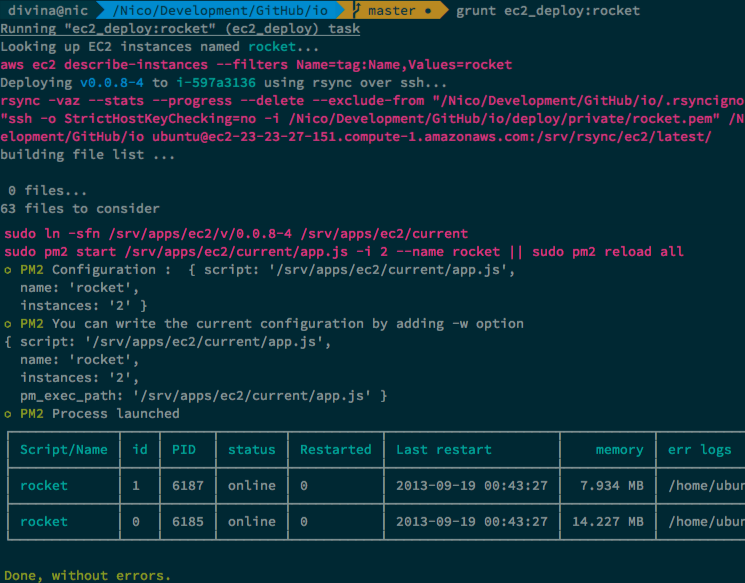 Queries EC2 for instances that match the given name and deploys to each on using ec2-deploy.

Reboot an instance with ec2-reboot

Reboots the instance by the specified name.

Enjoy it. Submit any issues you encounter, and send any feedback you might have my way.

The npm package grunt-ec2 receives a total of 10 weekly downloads. As such, grunt-ec2 popularity was classified as limited. Visit the popularity section on Snyk Advisor to see the full health analysis.

We found indications that grunt-ec2 is an Inactive project. See the full package health analysis to learn more about the package maintenance status.

Is grunt-ec2 safe to use?

While scanning the latest version of grunt-ec2, we found that a security review is needed. A total of 23 vulnerabilities or license issues were detected. See the full security scan results.