42 / 100
All security vulnerabilities belong to production dependencies of direct and indirect packages.

The npm package giframe receives a total of 11 downloads a week. As such, we scored giframe popularity level to be Limited.

Based on project statistics from the GitHub repository for the npm package giframe, we found that it has been starred 8 times, and that 0 other projects in the ecosystem are dependent on it.

We found a way for you to contribute to the project! Looks like giframe is missing a Code of Conduct.

Further analysis of the maintenance status of giframe based on released npm versions cadence, the repository activity, and other data points determined that its maintenance is Inactive.

An important project maintenance signal to consider for giframe is that it hasn't seen any new versions released to npm in the past 12 months, and could be considered as a discontinued project, or that which receives low attention from its maintainers.

giframe has more than a single and default latest tag published for the npm package. This means, there may be other tags available for this package, such as next to indicate future releases, or stable to indicate stable releases.

GIFrame.js can extract the GIF's first frame without reading whole bytes in both browsers and NodeJS environments.

It's fast (decode on-demand) and compatible (both in browsers and nodejs).

No need to wait for and read all bytes and decode chunk by chunk, especially when only extracting the first frame. So it may be used for improving GIFs loading experiences, providing more controllable GIF loading strategies and so on.

Some websites contain a lot of GIF images. Displaying animation images in your homepage, item list and so on may attract users' attention. However, GIF images are much larger than static images (sometimes 20x~30x depends on how many frames).

As a result, users need to wait for a long time to see GIF images. A common method is to extract the first frame as a placeholder and load GIF lazily when in view or clicked. There are lots of libraries to extract frames in the server-side. However, it has some limitations:

This repository aims to provide a stream-like (decode chunk by chunk) GIF decoder which can run in both browsers (client-side) and NodeJS (server-side).

Below is an browser example. The first frame is extracted and used as a placeholder while the GIF image is still loading.

You can also play with it by yourself. Go to the Example section >>

Support both in browsers and NodeJS,

More complex usages can be found in example/ directory. You can also run examples below ↓↓↓

This repo provides some examples in example/ which give you a quick start. 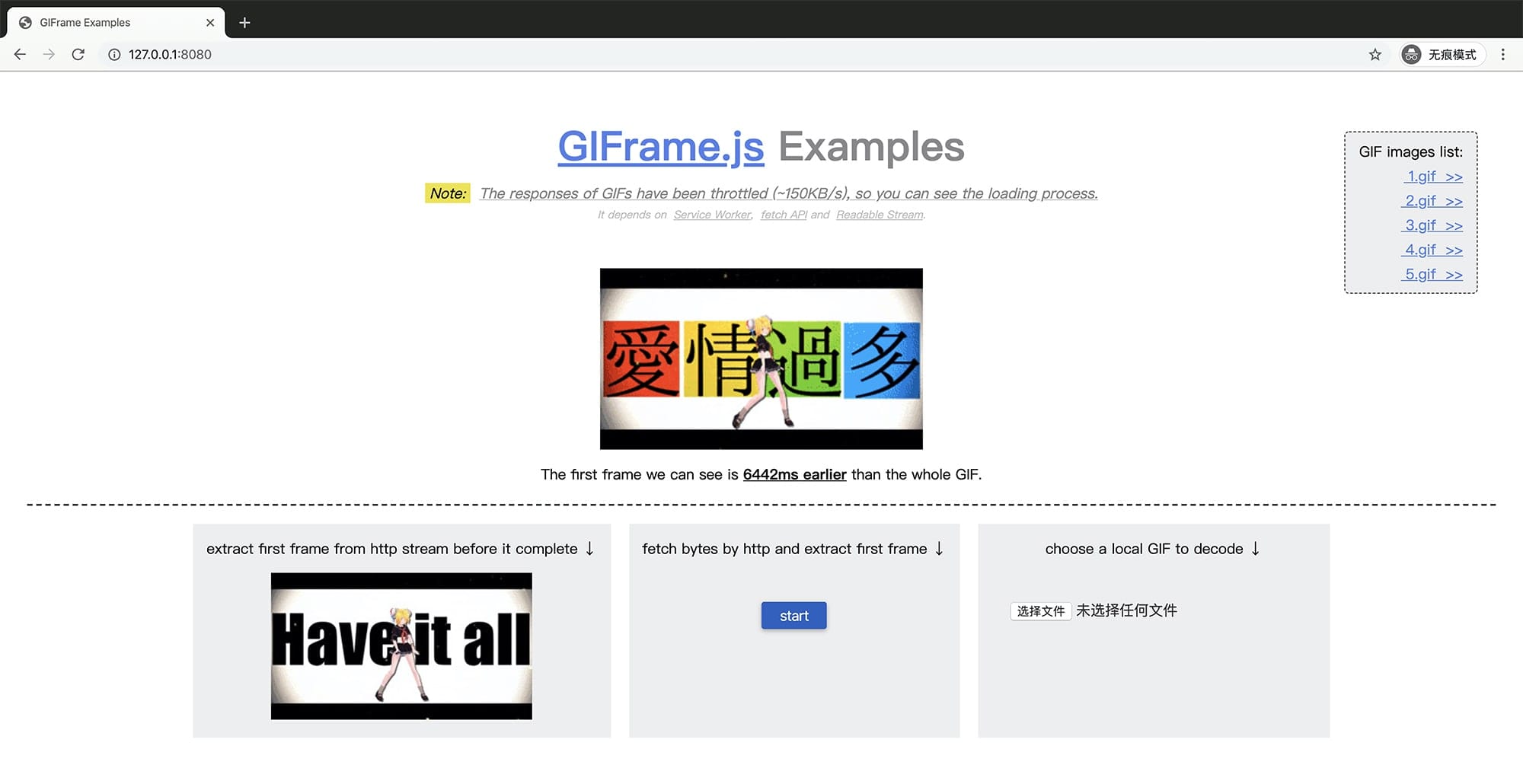 Or run in NodeJS,

For a quick and robust start, the decoder is mostly a folk of omggif. GIF is composed of many blocks. Giframe treats every block as a valid unit and resets the position to the previous block's end when meet an incomplete block. It will try to continue to decoding when receiving another chunk (more bytes). It's like stream.

To generate the image's base64, Giframe uses the Canvas API - node-canvas in NodeJS and native canvas in browsers. The canvas uses all RGBA pixels which are provided by Giframe to render a image and exports base64 string by .toDataURL().

By the way, the example in example/browser uses Service Worker, fetch event, fetch API and Readable Stream. It tees a stream from the response in fetch API and read it. Every chunk received will be used to decode progressively. Once the first frame is ready, it will be displayed on screen as a static preview.

Discarded: Now GIFrame.js uses Proxy object to throw an error when accessing an out-of-range item in Uin8Array and catch it in the decoder to reset to the previous valid block's tail position. Proxy object isn't compatible in some browsers.

After v0.2.0, GIFrame uses a basic get function instead of the Proxy object. So mostly its compatibility depends on Uint8Array and Int32Array which are supported in most browsers.

The npm package giframe receives a total of 11 weekly downloads. As such, giframe popularity was classified as limited. Visit the popularity section on Snyk Advisor to see the full health analysis.

We found indications that giframe is an Inactive project. See the full package health analysis to learn more about the package maintenance status.

Is giframe safe to use?

The npm package giframe was scanned for known vulnerabilities and missing license, and no issues were found. Thus the package was deemed as safe to use. See the full health analysis review.