The npm package fancy-rollup receives a total of 2 downloads a week. As such, we scored fancy-rollup popularity level to be Limited.

Based on project statistics from the GitHub repository for the npm package fancy-rollup, we found that it has been starred 3 times, and that 1 other projects in the ecosystem are dependent on it.

We found a way for you to contribute to the project! Looks like fancy-rollup is missing a Code of Conduct.

Further analysis of the maintenance status of fancy-rollup based on released npm versions cadence, the repository activity, and other data points determined that its maintenance is Inactive.

An important project maintenance signal to consider for fancy-rollup is that it hasn't seen any new versions released to npm in the past 12 months, and could be considered as a discontinued project, or that which receives low attention from its maintainers.

fancy-rollup has more than a single and default latest tag published for the npm package. This means, there may be other tags available for this package, such as next to indicate future releases, or stable to indicate stable releases. 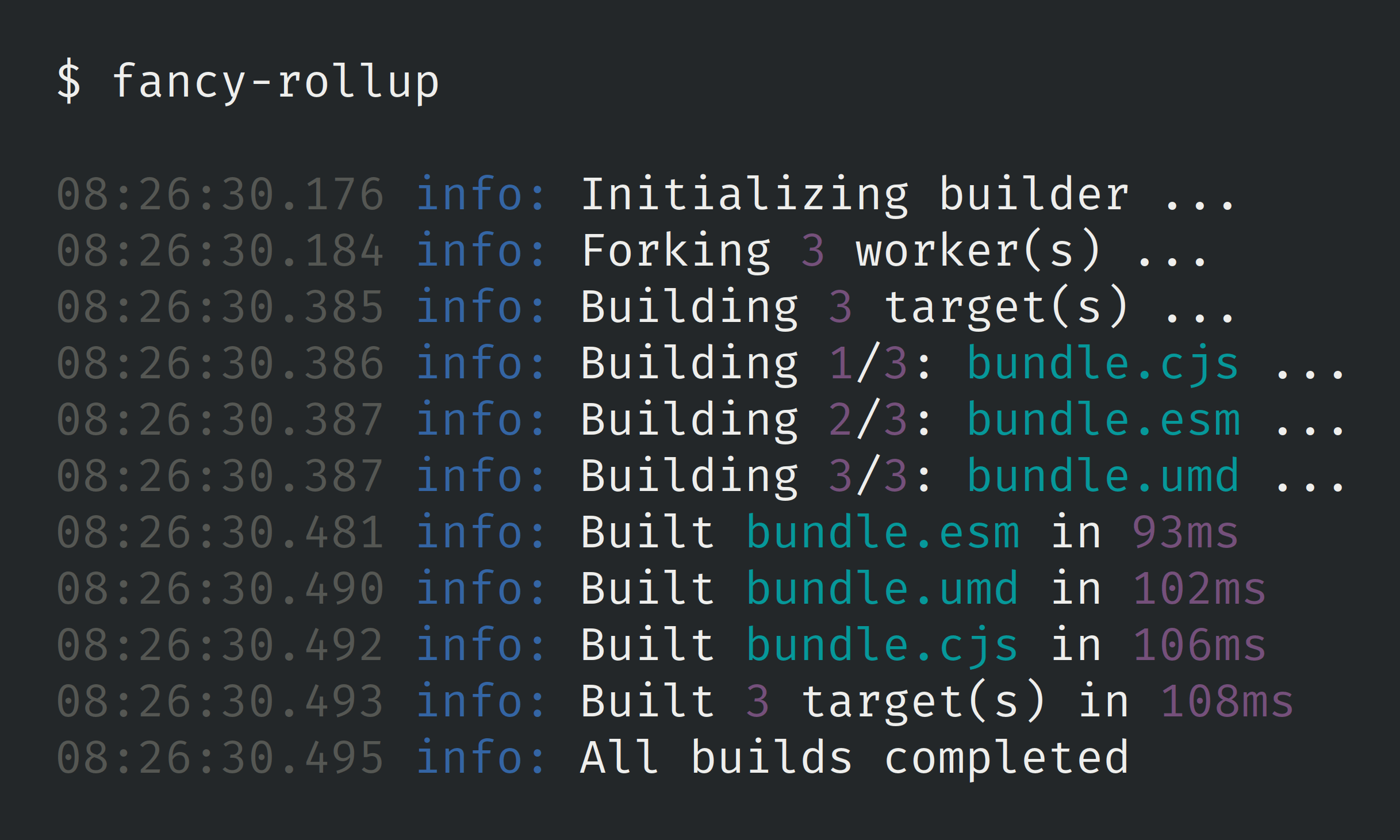 Rollup has the ability to create multiple bundles from a single invocation of the rollup command. All you need to do is export an array of build configurations from your configuration file. Great, right?

Well, using this method, a single Rollup process will simply create all the configured bundles in sequence. Unfortunately, that can get pretty slow. Computers are great at parallelization, so what you probably want to do instead is run your builds concurrently.

To accomplish that, you could create a configuration file per build and invoke rollup once for each of those files. Once you've figured out how to coordinate all that, you'd probably turn your attention to reporting progress from each of the builds in a comprehensive way.

What fancy-rollup does is handle all this for you. Firstly, it will start multiple Node processes that each run Rollup, using all of your machine's available processing power and dramatically speeding up builds. Secondly, it comes with multiple reporters that provide a nice overview of build progress.

For convenience, you can install fancy-rollup globally:

However, you probably want to make it a devDependency of your package instead:

Like Rollup itself, fancy-rollup will read rollup.config.js in the current working directory. Just export an array of build configurations and you're good to go.

An API for invoking fancy-rollup from your JavaScript code is in the works.

It's generally a good idea to lock down the version of Rollup that you want to use for bundling. Specifying an exact version lets you avoid API inconsistencies and other unexpected behavior.

This is accomplished by simply installing the correct rollup package alongside fancy-rollup. In other words, put both of them in the same package.json file so that yarn (or npm install) puts them under the same node_modules directory.

If none of the parent directories contain a rollup installation either, fancy-rollup will fall back to using its own version. You can check which one that is by consulting package.json.

The npm package fancy-rollup receives a total of 2 weekly downloads. As such, fancy-rollup popularity was classified as limited. Visit the popularity section on Snyk Advisor to see the full health analysis.

We found indications that fancy-rollup is an Inactive project. See the full package health analysis to learn more about the package maintenance status.

Is fancy-rollup safe to use?

While scanning the latest version of fancy-rollup, we found that a security review is needed. A total of 1 vulnerabilities or license issues were detected. See the full security scan results.