The npm package buche receives a total of 0 downloads a week. As such, we scored buche popularity level to be Limited.

Based on project statistics from the GitHub repository for the npm package buche, we found that it has been starred 6 times, and that 0 other projects in the ecosystem are dependent on it.

We found a way for you to contribute to the project! Looks like buche is missing a security policy.

Further analysis of the maintenance status of buche based on released npm versions cadence, the repository activity, and other data points determined that its maintenance is Inactive.

An important project maintenance signal to consider for buche is that it hasn't seen any new versions released to npm in the past 12 months, and could be considered as a discontinued project, or that which receives low attention from its maintainers.

We found a way for you to contribute to the project! Looks like buche is missing a Code of Conduct.

buche has more than a single and default latest tag published for the npm package. This means, there may be other tags available for this package, such as next to indicate future releases, or stable to indicate stable releases.

Buche is a language-agnostic, serverless, extensible HTML "logger". No matter what language you are using, with only a little bit of code, it can do a lot of things:

For example, you can save a command's output in a file, and play it back to Buche. If you have results in multiple files, you can merge them in a single Buche window as simply as buche cat <file1> <file2> .... You can use jq or even grep to filter interesting parts, sed or awk for simple tweaks, etc. You can connect Buche to a fifo and funnel multiple commands into it. You can also write your own middleware to transform JSON streams in whatever way is useful to you. 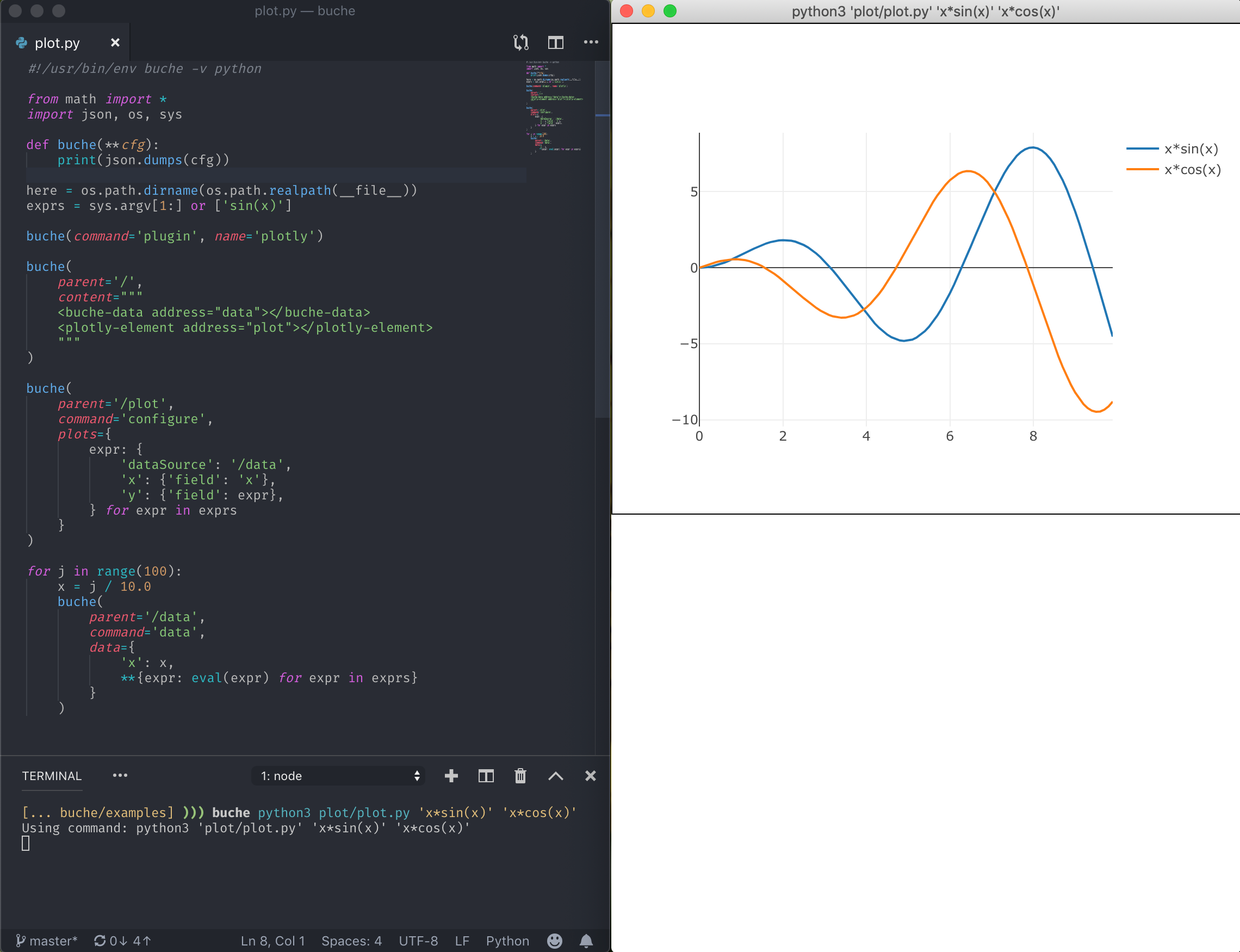 Packages and binaries for Mac/Linux can be downloaded on the latest release page.

You can also install buche with npm:

To install plugins, you can write:

It is usually not necessary to do it on the command line, however. If a program outputs the require command to require a plugin, Buche will prompt the user to install it if it cannot be found.

Buche takes commands from stdout and (when applicable) outputs commands on stdin. This means you can simply pipe your application to buche: <command> | buche (if you have no need for stdin) or you can have buche run the command for you: buche <command>. (Note: in a script, you can use the shebang #!/usr/bin/env buche <language> to make the shell invoke buche when executing the script).

The best way to learn how to use Buche is by example: take a program that does something you would like to do, and either inspect its code, or inspect its output (which should be pretty simple most of the time). For this purpose, the --inspect flag makes buche print out all the commands that are exchanged between it and a program, in the following format: -> <command_to_buche> and <- <command_from_buche>. The former is what you should print, the latter is what you should parse and respond to (but don't worry too much about that, because it is only relevant if you want to write an interactive application).

Here is how buche commands work:

The simplest command is log, which you can omit since it is the default. Log takes some HTML content and dumps it in the specified element. For example, this adds a div to the root element:

Other elements can be reached through their address. For example:

This will display, incrementally, the following HTML:

eval evaluates some JavaScript in the context of the specified parent. For example, this sets the focus on the element at /myinput:

The resource command does not have a parent. It simply adds a resource in the document's <head>. For example:

Anything you can put in <head> will work here.

The plugin command imports a plugin. It does not have a parent. If the plugin contains a slash, it will be interpreted as a path and the plugin will be fetched on the filesystem. Otherwise, buche will try to import the plugin from its global cache.

The redirect command redirects an address to another. This is mostly useful to redirect /stdout and /stderr, which by default go to separate tabs from the root element /. Example:

The template command, if provided, must be the first command. Either src or content can be used:

The template should define an element with address / and may also define /stdout, /stderr and /buche/errors, which is where Buche will respectively put non-json lines on stdout, non-json lines on stderr, and various errors such as a log command without a parent. Note that Buche will still make sure all of these exist even if they are not in the template, so that nothing is accidentally thrown away.

Each example is executable and uses the --inspect or -v flag to show you the example's output stream. Executing an example works simply because the shebang in the file invokes buche, and you can look at it with head -1 example. It's all very simple. The code for most of the examples easily fit on a screen.

Some Buche functionality and channels are not in any examples yet, unfortunately, but that will come.

This section contains advice about how to best use Buche with various programming languages. In general, it is possible to use it with any language without any specific support, but there are sometimes a few tricks to remember, and some languages may have libraries to make everything even easier.

IMPORTANT: By default, Python will buffer its output when it isn't directly outputting to a tty. That means the logging will be choppy, not very responsive, and might not even happen before the command is completely done executing. To solve this, pass the -u flag to python: instead of writing buche python <file>, write buche python -u <file>.

Package: There is a buche package for Python >= 3.6 which you can install with pip install buche. buche gives a nicer syntax to open channels, log into them, and notably provides a buche(object) function that pretty-prints Python objects as HTML. These objects can also be interacted with by clicking on them. See here for documentation on the package. It is recommended to run examples/pyrepl_nice.py (in this repository) for a demonstration.

Install a plugin with this command:

To use a plugin, you must have your program print out a require command prior to using components defined by the plugin.

There is no stable release of Buche at the moment and the interface and commands may still change. Some capabilities may be removed in order to enhance security, such as the ability to inject scripts with full permissions in the output stream. Suggestions are welcome.

Still, if you feel motivated, you can look at buche-cytoscape and buche-bokeh to get a general idea of how to write an extension.

Essentially, you want to define one or more custom components, and then various command_<name> methods for any commands you want your component to understand.

Note: these plugins are installed in ~/.config/buche/node_modules.

Because you won't know what you want until you see it. 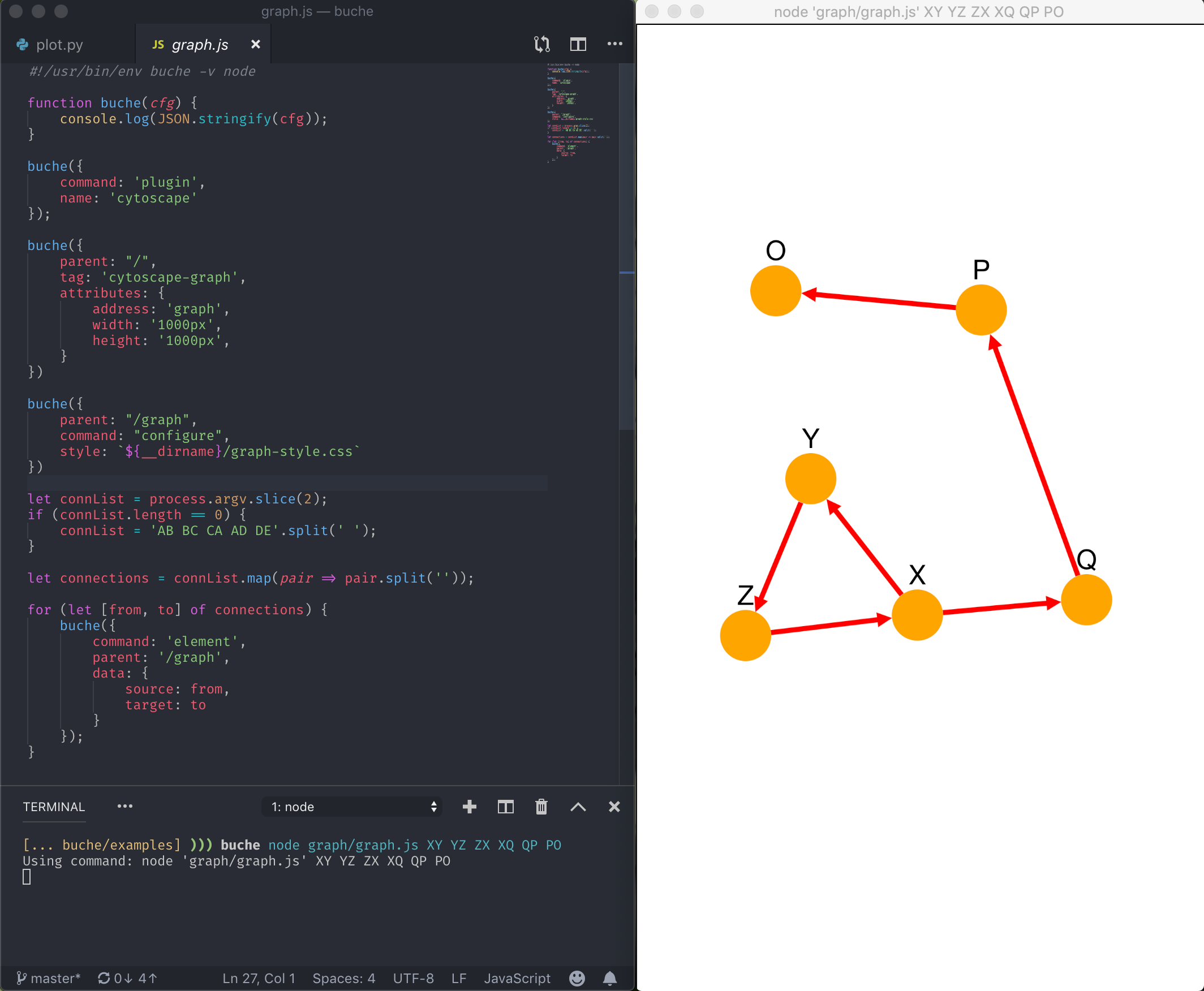 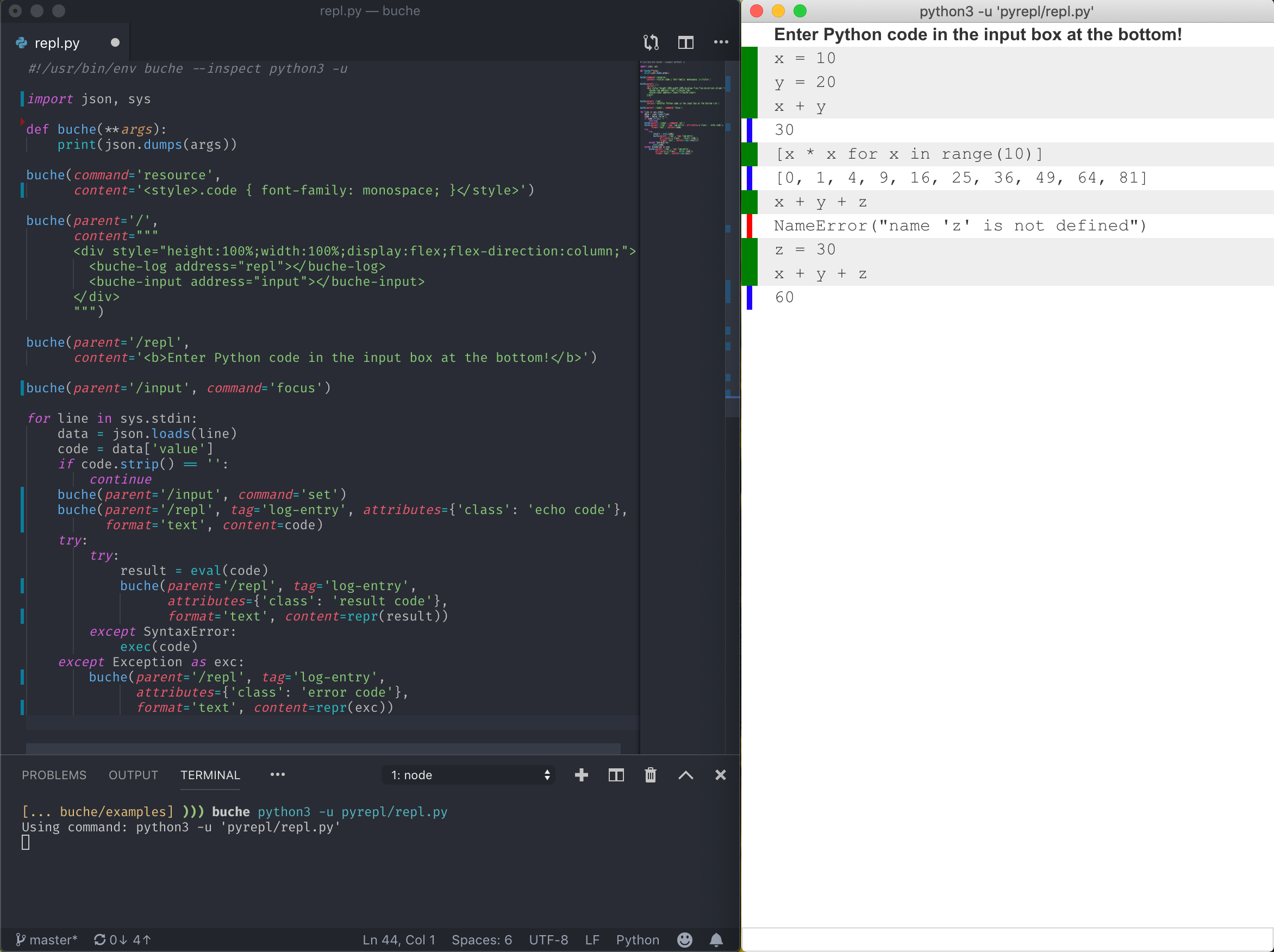 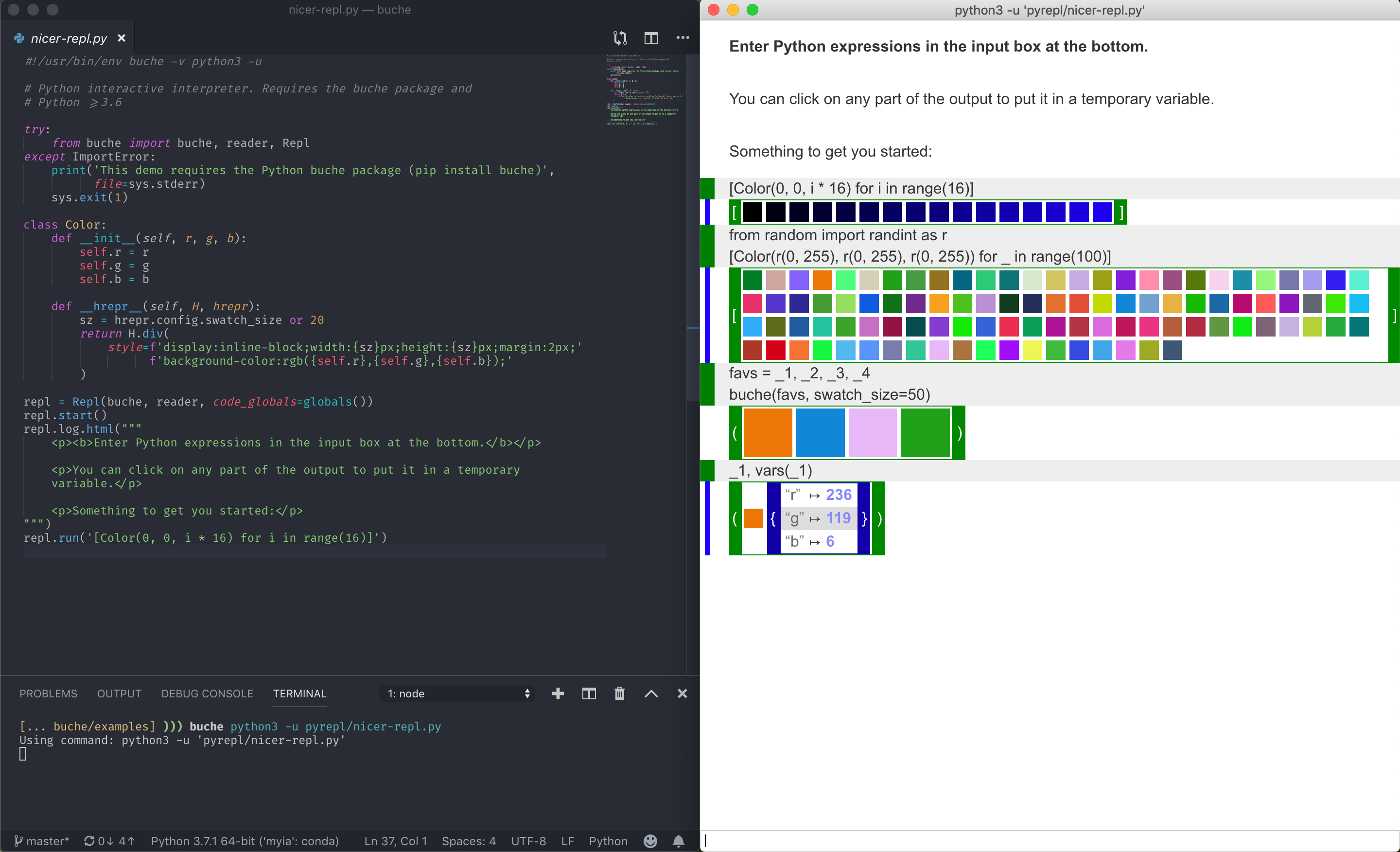 (If you're wondering, the hrepr package handles the pretty printing. It was written for Buche but it will also work in Jupyter, minus the ability to put objects in variables by clicking on their representation)

Merging the outputs of several commands in the same window: 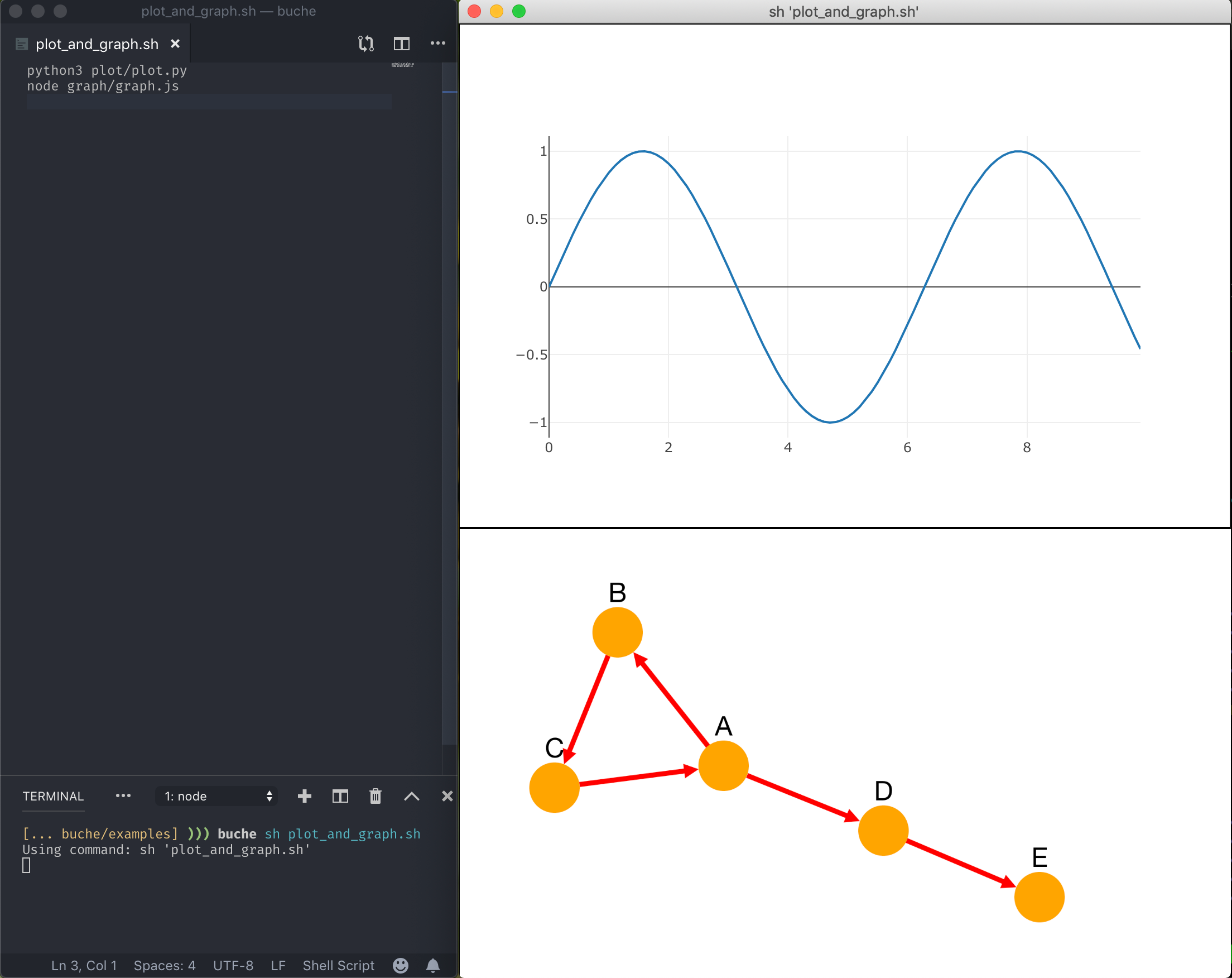 The npm package buche receives a total of 0 weekly downloads. As such, buche popularity was classified as limited. Visit the popularity section on Snyk Advisor to see the full health analysis.

Is buche safe to use?

While scanning the latest version of buche, we found that a security review is needed. A total of 85 vulnerabilities or license issues were detected. See the full security scan results.

We found indications that buche is an Inactive project. See the full package health analysis to learn more about the package maintenance status.