The npm package blitz-js-api receives a total of 6 downloads a week. As such, we scored blitz-js-api popularity level to be Limited.

Based on project statistics from the GitHub repository for the npm package blitz-js-api, we found that it has been starred ? times, and that 0 other projects in the ecosystem are dependent on it.

We found a way for you to contribute to the project! Looks like blitz-js-api is missing a security policy.

Further analysis of the maintenance status of blitz-js-api based on released npm versions cadence, the repository activity, and other data points determined that its maintenance is Inactive.

An important project maintenance signal to consider for blitz-js-api is that it hasn't seen any new versions released to npm in the past 12 months, and could be considered as a discontinued project, or that which receives low attention from its maintainers.

We found a way for you to contribute to the project! Looks like blitz-js-api is missing a Code of Conduct.

blitz-js-api has more than a single and default latest tag published for the npm package. This means, there may be other tags available for this package, such as next to indicate future releases, or stable to indicate stable releases.

Load balancer, cache and more for blitz-js. Built on Express.js and Socket.io.

This will open a web server on localhost:3003 which serves data from connected blitz-js-core nodes. No further setup needed - the core nodes are where our application logic goes.


How does it work?

At its core, blitz-js-api is a load balancer for connected blitz-js-core nodes. What makes it special is that it allows the use of custom connection adapters that create a common req and res object from any connection type. (HTTP & Socket.io by default)

This way our middleware functions and routed endpoints will work for all connection types, with no need to adjust them individually.


For further understanding, here's a simple model showing the way a request will go until we get a response: 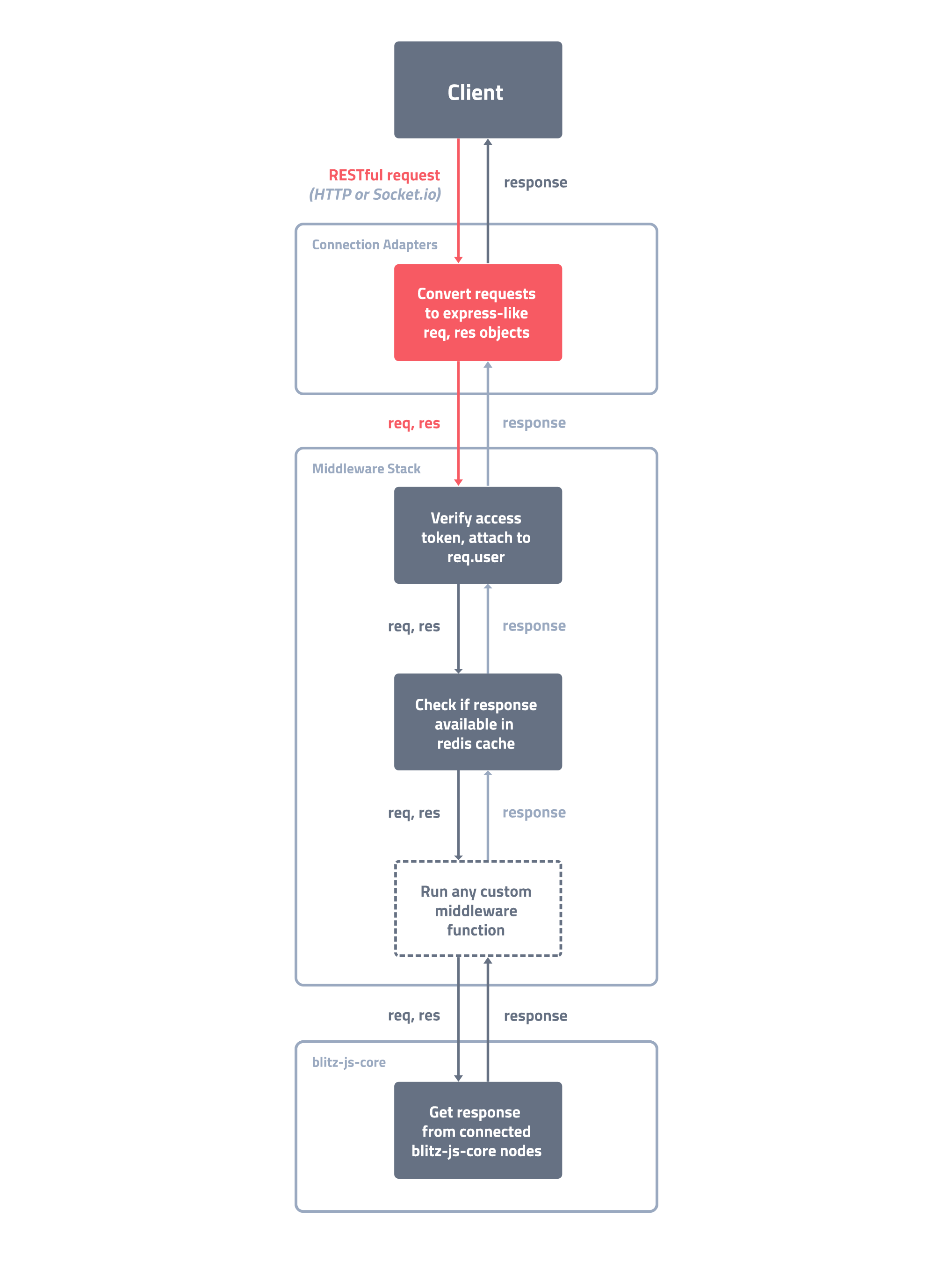 This is only one half of the way a request goes. To see what happens once the request is sent to a connected core node, check out blitz-js-core.

If you need to access the req, res objects before they're sent to the core node, you can simply add your custom function to the async middleware stack. It behaves much like express middleware, but takes advantage of ES7 async.

We recommend reading through the full docs at the async-middleware-stack repo if you need further information.

If necessary, you can still add native connection middleware which runs before our own.


Making requests as a client

We heavily recommend using blitz-js-query since it takes care of authorization, rate limits and potential downtimes automatically. This package is also used to connect core nodes to API nodes, so we most likely won't be slacking with its maintenance.

The npm package blitz-js-api receives a total of 6 weekly downloads. As such, blitz-js-api popularity was classified as limited. Visit the popularity section on Snyk Advisor to see the full health analysis.

Is blitz-js-api safe to use?

While scanning the latest version of blitz-js-api, we found that a security review is needed. A total of 2 vulnerabilities or license issues were detected. See the full security scan results.

We found indications that blitz-js-api is an Inactive project. See the full package health analysis to learn more about the package maintenance status.