The npm package arrow-line receives a total of 30 downloads a week. As such, we scored arrow-line popularity level to be Limited.

Based on project statistics from the GitHub repository for the npm package arrow-line, we found that it has been starred 18 times, and that 0 other projects in the ecosystem are dependent on it.

We found a way for you to contribute to the project! Looks like arrow-line is missing a Code of Conduct.

Further analysis of the maintenance status of arrow-line based on released npm versions cadence, the repository activity, and other data points determined that its maintenance is Inactive.

An important project maintenance signal to consider for arrow-line is that it hasn't seen any new versions released to npm in the past 12 months, and could be considered as a discontinued project, or that which receives low attention from its maintainers.

arrow-line has more than a single and default latest tag published for the npm package. This means, there may be other tags available for this package, such as next to indicate future releases, or stable to indicate stable releases.

Draw arrows between html elements in browser using SVG. Based on this article.

Get it from CDN: https://cdn.jsdelivr.net/npm/arrow-line/dist/arrow-line.min.js 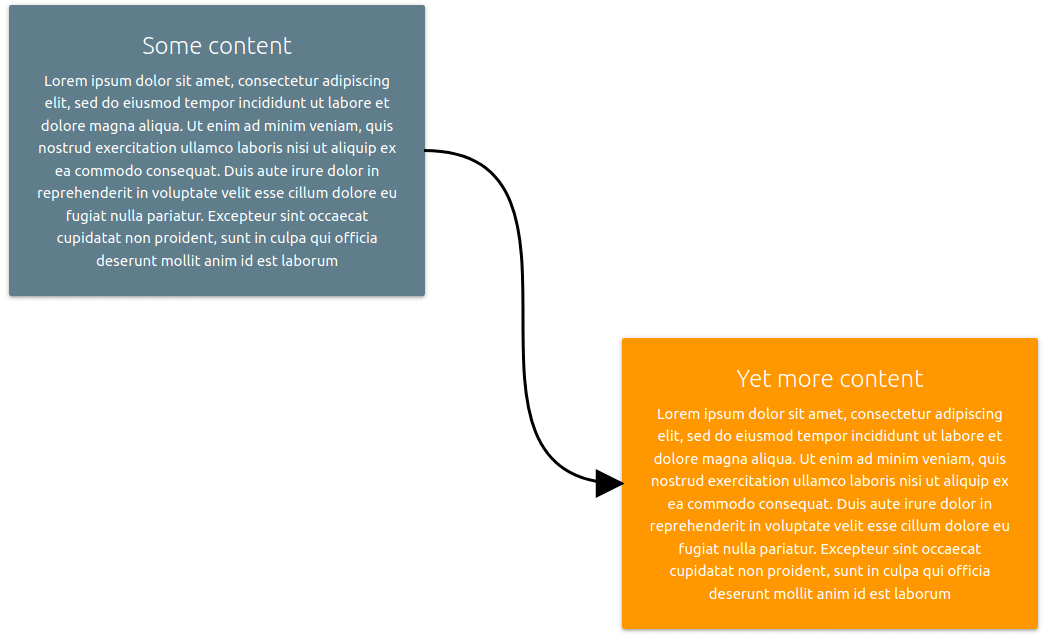 Or, add directly via <script> tag:

Recently I was doing an interactive presentation for which I wanted to draw diagram-like arrows between cells of a html table. I've found an article from an author who had similar problem and summarized a solution nicely - this is my effort to extract it in a library.

Basically, we create an SVG element in the top left corner of the page, and try to find the coordinates of the elements we wish to connect (relative to the origin of svg coordinate system). We then draw a bezier curve between the points (and use a marker for arrowhead).

or simply download dist/arrow-line.min.js and include it in your page.

The library can be added directly to the page with a script tag:

which exposes it as a global variable (arrowLine), or it can be used as UMD (CommonJS/AMD/ES6) module.

Draw an arrow with:

<source> and <destination> are either css/query selector strings or objects {x: .., y:..} containing pairs of coordinates. Resulting arrow begins at <source> and ends at <destination>. You can provide further options (described below) to customize the arrow.

arrowLine function returns an object (arrow in the examples) with two methods:

For ease of local development, there is a very minimal web page (index.html) in the repository root. The following package.json scripts are available:

dist folder is included in the repo for user convenience. Similarily, a small chunk of lodash is bundled-in directly.

The project in its current iteration covers my use-case adequately. If it were to be developed further, the first major milestone would be to add some kind of framework for detecting visual regressions.

The npm package arrow-line receives a total of 30 weekly downloads. As such, arrow-line popularity was classified as limited. Visit the popularity section on Snyk Advisor to see the full health analysis.

We found indications that arrow-line is an Inactive project. See the full package health analysis to learn more about the package maintenance status.

Is arrow-line safe to use?

The npm package arrow-line was scanned for known vulnerabilities and missing license, and no issues were found. Thus the package was deemed as safe to use. See the full health analysis review.