Based on project statistics from the GitHub repository for the npm package @teradataprebuilt/fastcall-win32-node-v47, we found that it has been starred 196 times, and that 66 other projects in the ecosystem are dependent on it.

We found a way for you to contribute to the project! Looks like @teradataprebuilt/fastcall-win32-node-v47 is missing a Code of Conduct.

Further analysis of the maintenance status of @teradataprebuilt/fastcall-win32-node-v47 based on released npm versions cadence, the repository activity, and other data points determined that its maintenance is Inactive.

An important project maintenance signal to consider for @teradataprebuilt/fastcall-win32-node-v47 is that it hasn't seen any new versions released to npm in the past 12 months, and could be considered as a discontinued project, or that which receives low attention from its maintainers.

@teradataprebuilt/fastcall-win32-node-v47 has more than a single and default latest tag published for the npm package. This means, there may be other tags available for this package, such as next to indicate future releases, or stable to indicate stable releases.

fastcall is a foreign function interface library which aim is to provide an easy to use, 100% JavaScript based method for developers to use native shared libraries in Node.js, without needing to touch anything in C++ and without sacrificing too much performance. It's designed with performance and simplicity in mind, an it has comparable function call overhead with hand made C++ native modules. See the benchmarks.

There is a a popular dynamic binding library for Node.js: node-ffi. Then why we need another one could ask? For performance! There is a good 20x-40x function call performance overhead when using node-ffi compared to hand made C++ native module, which is unacceptable in most cases (see the benchmarks).

But don't forget to install CMake.js as a global module first: 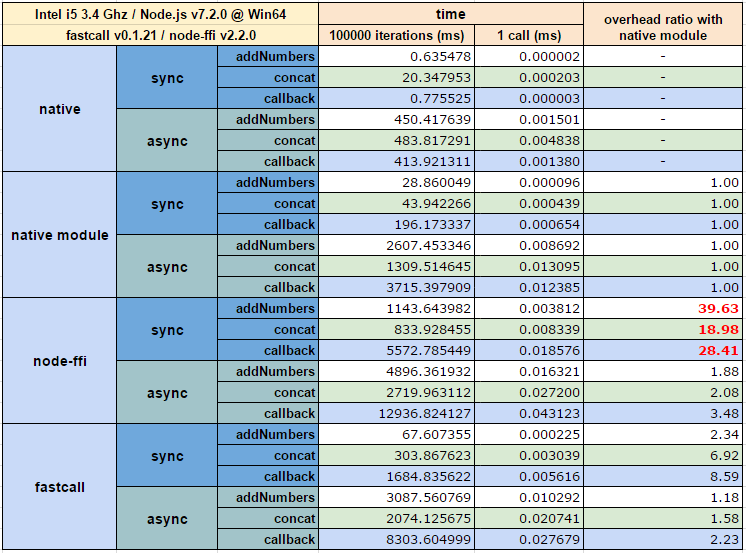 All tests implemented in:

Yeah, there is a room for improvement at fastcall side. Improving marshaling and callback performance is the main target of the future development.

Central part of fastcall is the Library class. With that you can load shared libraries to Node.js' address spaces, and could access its functions and declared types.

Let's take a look at ref before going into the details (credits for TooTallNate). ref is a native type system with pointers and other types those are required to address C based interfaces of native shared libraries. It also has a native interface compatible types for structs, unions and arrays.

In fastcall there are a bundled versions of ref, ref-array, ref-struct and ref-union. Those are 100% compatible with the originals, they are there because I didn't wanted to have a CMake.js based module to depend on anything node-gyp based stuff. Bundled versions are built with CMake.js. The only exception is ref-array, fastcall's version contains some interface breaking changes for the sake of a way much better performance.

See the original FAQ there: https://github.com/TooTallNate/ref-array

There are two huge performance bottleneck exists in this module. The first is the price of array indexer syntax:

Those [0] and [1] are implemented by defining Object properties named "0" and "1" respectively. For supporting a length of 100, there will be 100 properties created on the fly. On the other hand those indexing numbers gets converted to string on each access.

Because of that, fastcalls version uses get and set method for indexing:

Not that nice, but way much faster than the original.

The other is the continous reinterpretation of a dynamically sized array.

So far so good, but in each iteration arr will gets reinterpreted to a new Buffer with a size that would provide access to an item of index i. That's slow.

In fastcall's version array's length is writable, so you can do:

Which means only one reinterpret, and this is a lot of faster than the original.

Unfortunately those are huge interface changes, that's why it might not make it in a PR.

The interface uses ref and co. for its ABI.

For declaring functions, you can go with a node-ffi like syntax, or with a C like syntax.

Declared functions are accessible on the lib's interface:

About sync and async modes please refer for fastcall.Library's documentation.

If a function is async, it runs in a separate thread, and the result is a Bluebird Promise.

You can always switch between a function's sync and async modes:

You get the idea.

By default, a library's asynchronous functions are running in parallel distributed in libuv's thread pool. So they are not thread safe.

For thread safety there are two options could be passed to fastcall.Library's constructor: syncMode.lock and syncMode.queue.

Easy as goblin pie. (Note: struct interface is ref-struct, and union is ref-array based.)

You can go with the traditional (node-ffi) way:

But there is a better option. You can declare struct on library interfaces, and this way, fastcall will understand JavaScript structures on function interfaces.

After that the structure is accessible on library's structs property:

The real benefit is that, by this way - because the library knows about your structure - you can do the following:

Way much nicer and simpler syntax like the original, ain't it?

Declaring unions is exactly the same, except 'union' used instead of 'struct' on appropriate places. (Note: struct interface is ref-union based.)

Declaring arrays is not much different than declaring structures and unions. There is one difference: arrays with fixed length are supported.

Of course object syntax is available too:

After that the array is accessible on library's arrays property:

Of course you can declare fixed length arrays directly:

And any fixed or arbitrary length array type could get resized on usage:

To drive this, you need a callback and a function on your fastcall based library defined. It could get declared by object syntax:

If you wanna use you callbacks, structs, unions or arrays more than once (in a loop, for example), without being changed, you can create a (ref) pointer from them, and with those, function call performance will be significantly faster. Callback, struct, union and array factories are just functions on library's property: interface.

For converting JavaScript string to (ref) pointers back and forth there are ref.allocCString() and ref.readCString() methods available.

However for converting JavaScript strings to native-side read-only strings there is a much faster alternative available in fastcall:

Native resources must get freed somehow. We can rely on Node.js' garbage collector for this task, but that would only work if our native code's held resources are memory blocks. For other resources it is more appropriate to free them manually, for example in try ... finally blocks. However, there are more complex cases.

Let's say we have a math library that works on the GPU with vectors and matrices. A complex formula will create a bunch of temporary vectors and matrices, that will hold a lot memory on the GPU. In this case, we cannot rely on garbage collector of course, because that knows nothing about VRAM. Decorating our formula with try ... finally blocks would be a horrible idea in this complex case, just think about it:

So we need an automatic, deterministic scoping mechanism for JavaScript for supporting this case. Like C++ RAII or Python's __del__ method.

The good news is all three mentioned techniques are supported in fastcall.

For accessing fastcall's RAII features you need a class that inherits from Disposable. It's a very simple class:

For prototype based inheritance please use Disposable.Legacy as the base class:

When there is no alive references exist for your objects, they gets disposed automatically once Node.js' GC cycle kicks in (lib.releaseStuff(handle) would get called from the above example). There is nothing else to do there. 😃 (Reporting approximate memory usage would help in this case, though.)

For deterministic destruction without that try ... catch mess, fastcall offers scopes. Let's take a look at an example:

A disposable could escape from a nest of scopes at anytime. This will be handy for creating classes those are a compound of other disposables. Escaped disposable would become a free object that won't get affected further by the above rules. (They would get disposed manually or by the garbage collector eventually.)

scope's result is the result of its function.

Rules of propagation is described above. Propagation also happens when the function returns with:

This lookup is recursive, and apply for scope.escape()'s argument, so you can escape an array of Map of disposables for example with a single scope.escape() call.

Coroutines supported by calling scope.async. So the above example turns to:

Way much nicer, eh? It does exactly the same thing.

If you happen to have a node-ffi based module, you can switch to fastcall with a minimal effort, because there is a node-ffi compatible interface available:

Works exactly like node-ffi and ref modules. However there are some minor exceptions:

We found indications that @teradataprebuilt/fastcall-win32-node-v47 is an Inactive project. See the full package health analysis to learn more about the package maintenance status.

Is @teradataprebuilt/fastcall-win32-node-v47 safe to use?

While scanning the latest version of @teradataprebuilt/fastcall-win32-node-v47, we found that a security review is needed. A total of 13 vulnerabilities or license issues were detected. See the full security scan results.