Based on project statistics from the GitHub repository for the npm package @openeuropa/bcl-data-list-group, we found that it has been starred 12 times.

We found a way for you to contribute to the project! Looks like @openeuropa/bcl-data-list-group is missing a Code of Conduct.

Further analysis of the maintenance status of @openeuropa/bcl-data-list-group based on released npm versions cadence, the repository activity, and other data points determined that its maintenance is Healthy.

We found that @openeuropa/bcl-data-list-group demonstrates a positive version release cadence with at least one new version released in the past 3 months.

@openeuropa/bcl-data-list-group has more than a single and default latest tag published for the npm package. This means, there may be other tags available for this package, such as next to indicate future releases, or stable to indicate stable releases.

Library of components based on Bootstrap 5

This library is mainly a development environment for components released as packages on npm under the @openeuropa organization and it provides a style-guide using storybook where all the components are rendered through the twig templates defined in the library and most of their capabilities are visible thanks to interactive fields called controls.

Be sure to have Node.js as well as yarn installed before proceeding, this library uses the current LTS version of node.js, named fermium

How to use a package from npm

The @openeuropa/bcl-builder is a package providing scripts to be executed via the command line, styles, scripts, copy, rename and sprite. They can be used respectively to compile SASS files and minify css files, compile and minify js files, to copy files or rename files and to generate svg sprites. It comes with a bin file that is available when the package is installed and can be run as npm run ecl-builder scriptName. It supports a configuration file bcl-builder.config.js where each script can be configured to perform specific operations in the enviroment where they are used. Examples of the configuration files are available in the theme packages, the bcl-builder is used to build those packages in the library as well.

Anatomy of a theme package

The theme packages aim to be a ready solution for integrating the library in any platform supporting twig: 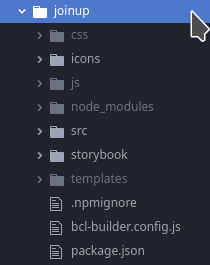 Each theme package is meant to provide all the needed resources in terms of css, js, twig templates and icons. Js is offered in three different formats, umd (universal module definition), esm (ES Modules) and the bundle (which includes popper Js), similarly to what happens with the files distributed by the bootstrap library. All the files come with a map file and with a minified version ready for being used in a production website. The twig templates are in the templates folder inside a folder with the respective package name so that they can be directly used with a loader defining the @oe-bcl namespace and pointing at the templates folder.

The twig packages are available as individual npm packages but also directly available in the theme packages, the @openeuropa/bcl-twig-templates package which is a collection of all the BCL default templates stored in a folder with the package name.

The library uses @oe-bcl as the namespaces for the templates so a typical twig-loader would be defined as such:

We found that @openeuropa/bcl-data-list-group demonstrated a healthy version release cadence and project activity. It has a community of 7 open source contributors collaborating on the project. See the full package health analysis to learn more about the package maintenance status.

Is @openeuropa/bcl-data-list-group safe to use?

The npm package @openeuropa/bcl-data-list-group was scanned for known vulnerabilities and missing license, and no issues were found. Thus the package was deemed as safe to use. See the full health analysis review.